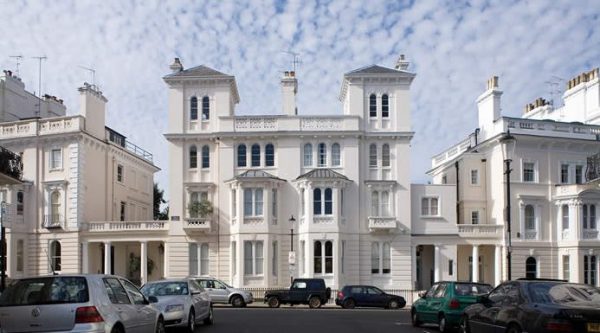 Introduction to the Ladbroke area, its streets
and buildings

The Greater London Council’s Survey of London calls the Ladbroke Estate ‘one of the finest townscapes in all London’. Yet this miniature garden city, a masterpiece of the romantic movement in town planning, was left to take its chance, exposed to neglect and reckless redevelopment for much of this century. Fortunately, in 1969, the Borough Council established it as a Conservation Area.

It was no accident that the picturesque style should take root and flourish in Notting Hill. The site was, for London, unusually exciting: an airy spur of Notting Hill plunging on three sides into the sticky hollows of Notting Dale. Both the main designers of the estate, Thomas Allason (1790-1852) and Thomas Allom (1804-1872) were well-known landscape artists as well as architects. Allason, commissioned by the Ladbroke family to begin the layout here in 1823, worked with the famous J B Papworth at Cheltenham. It was the fashionable air of Cheltenham’s Lansdowne and Montpelier estates that the designers hoped to bring to this dangerous building venture beside the Piggeries and Potteries of north-west London.

In the event it took nearly fifty years to find buyers for all the houses, and the succession of grinding halts brought ruin to the main developers. But Allason’s and Allom’s design evolved unscathed. Indeed, the ruin of successive developers only added variety to the layout. This remained true to the spirit of rus in urbe which had inspired Wood’s Bath, Nash’s Regent’s Park and Papworth’s Cheltenham. There were classical groves alternating with tiers of leafy crescents, stucco villas alternating with plain brick terraces. The great spire of St John’s loomed over the plane trees like an obelisk in a park. And everywhere there were gardens, private and half private, hidden and half hidden, glimpses of knolls and leafy dells, as though the real country began only a few steps beyond the last back door.

It was in the design of the fifteen communal gardens that Allason and Allom showed their greatest inventiveness. For two centuries the London square had faced outwards: terraces of private houses faced their private communal garden across a noisy and sometimes dangerous strip of pavements and roads. Allason and Allom turned the London square inside out, or (to be more precise) outside in. The rows of villas and terraces were designed to back onto communal pleasure grounds separated only by small private gardens. The pleasure grounds were thus more private, safer and more accessible to the residents. The Ladbroke estate remains the best example in the world of a miniature garden city designed on this delightful principle.

Please select from the following menu for more information about the area. The history pages also contain articles about the history of the area.