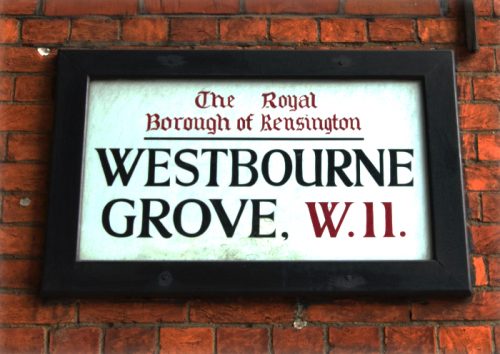 Origin of street names in the Ladbroke area

Until the early 19th century, the Ladbroke area was largely country and almost none of the current roads existed (the main exceptions were the Uxbridge Road – now Holland Park Avenue – along the southern border of the Ladbroke estate;  and Portobello Lane, now Portobello Road).

During the building boom of the 19th century, the owners of the area developed the land and what are today’s streets were gradually created. The main method of development was the granting of building leases by the landowners to undertakers (usually builders or surveyors), who then built whole terraces or in some cases whole streets of houses.

Apart from the “Ladbroke” streets (named after the original owner/developer of the area), most of the streets seem to have been given their names by the whim of the developer or builder concerned. Often they seem to have been named after some place with which that individual developer happened to be associated, or after a distinguished statesman whom the developer presumably admired. Originally, many of the individual terraces of houses in each street had their own names, but later in the 19th century these were formally incorporated into the streets on which they were situated and given their present street numbers.

Built in the early 1860s. The south side of the street was originally known as Lansdowne Road Terrace (this is the name given to it, for instance, in an 1858 covenant between Richard Roy, the then main developer of this area, and the freeholders and leaseholders of building plots and “houses in carcase” on that side of the road). The origin of the street name Arundel Gardens is not known. However, Arundel in Sussex is the seat of the Howard family, Dukes of Norfolk, and James Weller Ladbroke had his country seat near there.

In the 1860s, when the main construction began in what is now Blenheim Terrace, the section of street east of Ladbroke Grove was called St Columb Road and the section west of Ladbroke Grove was called Sussex Road. The different terraces of houses all had their own nomes. Blenheim Terrace was the name given to one of the first rows of houses built in the then Sussex Road, presumably after the Duke of Marlborough’s famous victory over the French and Bavarians at Blenheim in Bavaria in 1704. In 1866, the name Blenheim Crescent was officially approved for the whole street, replacing Sussex Road, and incorporating Arundel Terrace, Park Terrace, Blenheim Terrace, St Mark’s Gardens; and Ebury Villas.

Built around 1871. Probably named after Boyne House, which stood on the site of Holland Park tube station. The first four houses to the east of Boyne House (numbers 68-74 (evens) Holland Park Avenue) were originally called Boyne Terrace, and Boyne Terrace Mews provided accommodation for the horses and carriages belonging to these houses and those in the next terrace along.

Bulmer Mews was built probably first in the 1850s. It seems originally to have been called Victoria Mews. But by 1881 it had been renamed Albert Mews or Prince Albert Mews after the pub down the side of which it runs. It seems to have been given its present name of Bulmer Mews in the 1930s by association with a little street called Bulmer Place that ran down the other side of the pub roughly where the service road for the shops on the north-west side of Notting Hill Gate now runs. It is not clear where the name Bulmer comes from.

Built in the mid 1840s. The developer, William Henry Jenkins, came from Hereford and appears to have chosen the name Chepstow after the town of Chepstow near his home. The neighbouring Denbigh Terrace, Ledbury Road and Pembridge Road were named for similar reasons.

Built in the 1840s and 1850s. The street name probably refers the 4th Earl of Clarendon (1800-1870), a well-known 19th century statesman, who occupied a number of senior Ministerial posts around the time that Clarendon Road was being built, including the post of Foreign Secretary during the Crimean War.

Originally, the section of the street between Holland Park Avenue and Lansdowne Rise was called Park Road, and many of the Clarendon Road terraces had their own names. These included Grove Terrace (Nos. 2-10 evens); Cambridge Villas (12-14 evens); Park Villas (Nos. 13-15 odds); Clarendon Terrace (16-26 evens); Clarendon Villas (41-71 odds); Clarendon Villas North; Hanover Terrace Villas (Hanover Terrace was the old name of Lansdowne Walk); and Gloucester Terrace (90-110 evens). These were all formally incorporated into Clarendon Road and given their current numbers in 1861.

Probably after Admiral Sir Edward Codrington (1770-1851), who commanded a ship at Trafalgar, led the fleet at Washington and Baltimore in the American War and commanded the combined fleets of Britain, France and Russia at the battle of Navarino.

The present crescent was built in the early 1860s. The Rev. Dr Samuel Walker of St Columb Major in north Cornwall owned land here and lost a fortune from unwise building speculation. But the name more probably came from Prince Albert Edward, Duke of Cornwall and later King Edward VII, who came of age in 1862.

Built mainly in the 1850s. Origin of the name unknown, but possibly after the contemporaneous Earl of Elgin, who was active on a variety of diplomatic missions and subsequently became Viceroy of India.

Originally, numbers 2-126 Elgin Crescent were known as Elgin Road. There were also two terraces with their own names: St John’s Terrace (numbers 63-81) and Wellington Terrace.

In 1641, Sir Henry Rich, subsequently Earl of Holland, inherited the estate of his father-in-law Sir Walter Cope. This included what is now Holland Park and a lot of other land around it. In 1605, Cope had built himself a house (the present semi-ruined Holland House in Holland Park), which was first known as Cope’s Castle. His son-in-law changed the name to Holland House, and the garden and parkland around the house became known as Holland Park. The Rich family title died out in 1759, but in 1763 the Fox family, the new owners of Holland House, were created Barons Holland, so the name lived on and was used for a number of nearby streets, including Holland Park Avenue.

Originally, Holland Park Avenue was known as the Uxbridge Road, as it was the main road out of London to Uxbridge (and its continuation beyond Shepherd’s Bush is still known by that name).  It is an extremely ancient thoroughfare, probably dating back to Saxon times, and formed the southern boundary of the estate acquired by the Ladbroke family in the mid 1770s.

Many of the individual terraces along Holland Park Avenue originally had their own names. These included Grove Terrace (between the Underground station and Clarendon Road); Boyne Terrace (numbers 68-74 evens, immediately to the east of the Underground station); and Notting Hill Terrace (east of Ladbroke Grove). Campden Hill Square, on the other side of the road, was also at that time known as Notting Hill Square.

Horbury Crescent was built in the 1850s. The Crescent and Mews were named after Horbury in West Yorkshire, the home town of the then treasurer and deacon of Horbury Chapel (now the Kensington Temple).

The Ladbroke family, who were wealthy bankers, acquired the land which is now the Ladbroke estate probably in the mid-18th century. It was then country. In 1819 the land descended from Richard Ladbroke to his nephew James Weller, on condition that the latter took the name of Ladbroke. The 1820s saw a boom in housebuilding in North Kensington, encouraging James Weller Ladbroke to invite developers to build houses on his land, and several of the new streets thus created were named after him.

Ladbroke Walk was originally called Ladbroke Terrace Mews, presumably because it served as mews for the horses and carriages of the occupants of the houses in Ladbroke Terrace.

All of these were built in the 1840s and were named after the Lansdowne area of Cheltenham, where the developers, Pearson Thompson and Richard Roy, had been active. Lansdowne Walk was known first as Queen’s Terrace and then as Hanover Terrace; and Lansdowne Rise was until 1937 known as Montpelier Road (Montpelier was a popular street name after the Napoleonic wars, as the French sent captured British officers there on parole, and many British prisoners-of war returned with fond memories of the place; Montpellier was also the name of another district of Cheltenham developed by Pearson Thompson).

Originally called Portobello Lane and under that name it dates back in the rate books to 1842. But it was in existence earlier and commemorates the name of the farm to which it led. The name probably derived from the 1739 capture of Puerto Bello in Central America from the Spaniards by Admiral Vernon (1684-1757) with only six ships.

It was originally called Chichester Road: this is, for instance the name that appears on the Ordnance Survey map of 1894-96; by the time of the 1912 edition it had acquired its present name, probably after the 1st Baron Rosmead, a distinguished British colonial administrator (chiefly in the Far East and South Africa), who died in 1897.

Named after the nearby church of St Mark’s, built in 1863. St Mark’s Place was originally called Chapel Road after the Baptist Chapel that stood on the north-east corner of Cornwall Crescent.

Built in the 1850s. Probably named after the noted politician Edward Stanley, 14th Earl of Derby, who became Prime Minister in 1852. There used also to be a Stanley Gardens Mews, which ran down the north side of St Peter’s church. All that is left of it now is the car-park behind the Notting Hill Brasserie.

Probably commemorates Admiral Vernon (see entry for Portobello Road above). The terrace of houses in Portobello Road that backs onto the mews was originally called Vernon Terrace, and the mews no doubt served these houses.

Westbourne Grove was originally known as Archer Street, after a Mr Archer who owned land in the area. It was given its present name in 1938, although it continued to be called Archer Street by people in the area for some years afterwards.

The Westbourne is one of London’s lost rivers. It was a stream that ran down from Hampstead into the Thames, passing not far from Westbourne Grove, crossing what is now the beginning of Bishop’s Bridge Road. Today, it runs entirely underground except where it emerges above ground near Lancaster Gate to become the Serpentine.

Only the short section of Westbourne Grove between Kensington Park Gardens and Portobello Road is in the Ladbroke area.

Probably named after Benjamin Wilby, who was involved in several 19th century development schemes in the area.

Volume XXXVII of the Survey of London, published for the Greater London Council in 1973;