Secular buildings of interest in the Ladbroke area

Apart from the theatres described elsewhere, the Ladbroke area has a number of secular buildings of interest. One of the main ones is Holland Park Underground Station..

This article first appeared in our newsletter, Ladbroke News, in the summer of 2012.

Holland Park station is one of the very few stations on the Central Line to retain its original architecture. The Central Line (or “Central London Railway”) opened in 1900 and was the second of the deep “Tube” lines to be built (the first was a portion of what is now the Northern line). The earlier “Underground” lines like the Metropolitan and Circle lines were built using the “cut and cover” method of tunnelling, with a trench being dug and then a cover being put over the top. Tube lines were much deeper and the tunnels were literally bored through the London sub-soil, requiring what was then a very new technology. Twin tunnels were bored, one for each direction, and the tunnels were only just big enough for the trains (unlike the more spacious Underground tunnels that took trains in both directions). Even though the tunnels were well below the surface, they were built as far as possible under streets to avoid the risk of subsidence, and the Central Line runs under Holborn, Oxford Street, Bayswater Road, Notting Hill Gate and Holland Park Avenue.

The original Central line ran from the Bank of England to Shepherd’s Bush. The stations all had hydraulic lifts, manufactured in New York, which were probably a lot more reliable than today’s lifts at Holland Park station. Except for Bank (which was entirely below ground), the stations for the line were designed by Harry Bell Measures, a well-known architect of the period. All were similar, in a curious mixture of neo-classical and art nouveau, with handsome facings in beige terracotta. According to a design in the Kensington Local Studies Library, Holland Park Station was originally intended to have an elaborate cupola at one corner (see below). But in the end, this seems never to have been built, and some of the decorative detail was also changed and simplified. 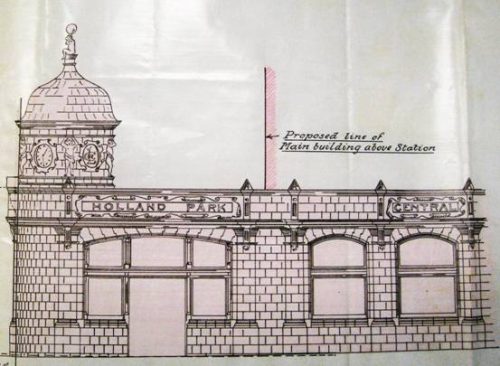 1899 design for the Lansdowne Road side of the station at Holland Park. Courtesy of Chelsea and Kensington Local Studies and Archives.

The station was built on the site of Boyne House. We have no idea what the latter looked like, but it was probably built in the 1820s and early maps show it to have been a large detached house standing in a spacious garden.

The stations were deliberately built as single storey structures with flat roofs in the expectation that commercial premises would be built on top – as indeed happened at Queensway, where a hotel was built on top of the station, and also at Oxford Circus, the other Harry Bell Measures station to survive in a recognisable form. But it seems that there was insufficient commercial interest in the Holland Park area, and our station retains its original single storey form, apart from the protrusion of the circular glass drum required to accommodate the modern lift mechanism. 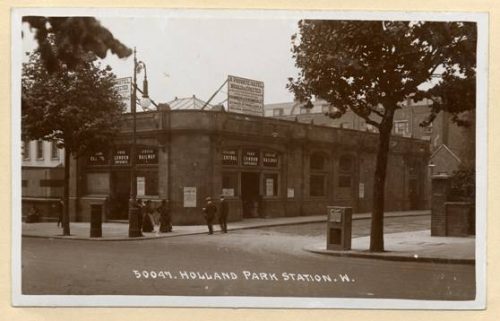 Postcard with view of Holland Park station shortly after its opening. The board on top is advertising the availability of the space above the station for a “private hotel.” Courtesy of Chelsea and Kensington Local Studies and Archives. 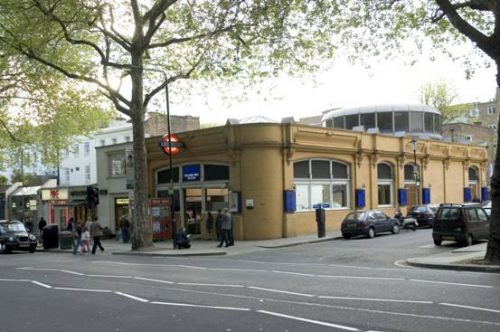 Holland Park station in modern times. It is a pity that London Underground have fixed obtrusive blue notice-boards to the terracotta walls, especially as at present most of them are not even being used.
Copyright Thomas Erskine 2006.