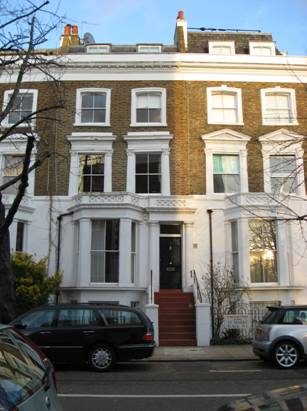 St Mark’s Place, a short street between Cornwall Crescent and Blenheim Crescent, was originally called Chapel Place after a Baptist Chapel (described in the entry for Cornwall Crescent) that stood on the eastern corner with Cornwall Crescent. It seems to have acquired its present name after a large church called St Mark’s was built in the neighbouring St Mark’s Road. The numbering of the houses in the street is eccentric, and almost certainly reflects the fact that Nos. 1-3 (consecutive) on the east side and numbers 4-10 on the south side were the earliest to be built and that the street acquired its numbers when they were the only buildings in the street (apart from the chapel).

Nos. 1-3 (consecutive), at the southern end of the road, constitute a short terrace of handsome uncoursed half-stucco houses (three storeys plus lower ground floor) with bay windows at ground floor level surmounted by semi-pierced stucco balconies, stucco decorations around the upper windows, and well-decorated cornices. There is no record of these houses in the Survey of London, but they were probably built around the 1860s, the last great period of building on the Ladbroke estate. Next to No. 1 is a matching corner house entered from Blenheim Crescent, obviously built at the same time, and together this range forms a symmetrical terrace, the end houses marked by more elaborate stucco decoration over the first floor windows.

At the other (northern) end of this side, the Ladbroke Grove Baptist Chapel used to stand. It is not clear when it was built, but probably in the 1860s. In 1881 the plans shown below were approved for its ‘re-erection’, together with the construction of four houses on the land between the chapel and Nos. 1-3. It is not clear how far the plans for rebuilding the chapel were taken, but three houses were built adjoining Nos. 1-3. They were numbered Nos. 11-13 (consecutive), as the intervening numbers had already been given to the houses on the other side of the street. They are higher than their neighbours, with four storeys and no basement, bay windows at both ground and first floor level, and elaborate stucco decoration, including stiff-leaf acanthus capitals to the mullions on the bay windows. Unusually for the Ladbroke estate they were not even half-stuccoed. Unfortunately, the brickwork of all the houses has been painted over. 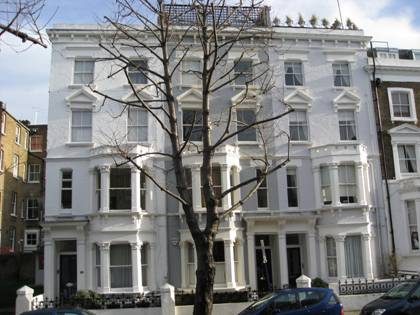 The chapel was demolished after the Second World War and the present modern block of flats, Hudson House, put up on the site.

Charles Blake, the developer of both Cornwall Crescent and part of Blenheim Cresscent, gave a consortium of London builders building leases for the houses at Nos. 4-10 (consecutive) in 1864-6 . The arrangement was that, once the houses had been built, the developer would give 99-year leases to their builders who could then let them to recover their costs, paying a ground rent to the landlord. The houses have three storeys plus basement, coursed half-stucco and curious key-pattern stucco bands around the first floor windows. They form a symmetrical terrace with the end houses set slightly forward. These houses also have an extra bit of decoration on their first floor windows. The cornices are elaborate and those of Nos. 5-7 are surmounted by pierced stucco balustrades, now lost from Nos. 8-9. No. 4 has a somewhat curious solid parapet instead of the balustrade; it is unclear whether this was part of the ‘bookending’ pattern to distinguish the end houses of the terrace (the parapet on No. 10 at the other end is badly damaged). 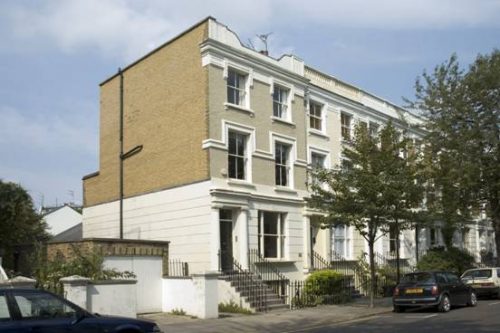 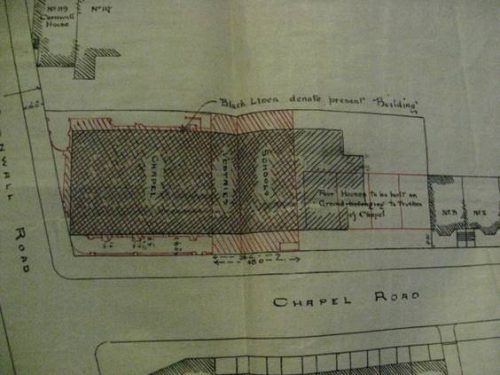 1881 plan for rebuilding the chapel and constructing four houses between the new chapel building and Nos. 1-3. From LCC planning archives in the RBKC Local Studies Centre.