Cornwall Crescent belongs to the third and final great period of building on the Ladbroke estate and the houses were constructed in the 1860s. Development of this area had suddenly become more attractive with the opening in 1864 of the Hammersmith and City line of the Metropolitan Railway with a station on Ladbroke Grove, and the introduction in the early 1860s of cheap workmen’s fares.

By that time the Ladbroke family had disposed of the land, either by selling the freehold or by giving 99-year peppercorn rents. The land on which Cornwall Crescent lies was in the hands mainly of two merchant-turned developers, Stephen Phillips, and the speculator and ex-Calcutta merchant Charles Blake, who had already developed successfully several other parts of the Ladbroke estate. They in their turn gave building leases to a variety of builders. The normal pattern was no doubt followed, according to which the builder had to build houses meeting certain standards; he then received a 99-year lease of the houses, which he would let out, thus recovering his costs, but he had had to pay a ground rent to the landowner.  In practice, both the freeholds (with the right to the ground rents) and the 99-year leaseholds were bought and sold and generally treated as investments.

The original inhabitants of the street were mainly tradesmen and people at the lower reaches of the middle classes. The census shows that most houses were divided up into two, three or four residences, probably sharing common facilities such as the privy at the back.

The houses that were erected were smaller than most of those to the south, relatively narrow and with only three floors above ground, of London stock brick with pillared porches and heavy stucco ornamentation around the windows – apart from a short range on the north side that was built in full stucco.

The Survey of London says of Cornwall Crescent (and also of Blenheim Crescent) that it was ‘built in the early 1860s in a debased classical style,’ which demonstrated ‘the marked degeneration of taste which was then beginning to take place on the remaining parts of the Ladbroke estate.’ Nevertheless, it is not without interest; the stucco terrace on the north side must have been handsome; and the street’s crescent shape reflects the original grand plan for the Ladbroke estate of concentric circles Judging by a plan on a deed in the Local Studies Centre, the original intention was that Clarendon Road, like Lansdowne Road, would sweep round in a great crescent to Ladbroke Grove, but something obviously went wrong and Cornwall Crescent was built instead). Unfortunately, the street was badly damaged during World War 2, especially at the Clarendon Road end (where a bomb on 25 September 1940 caused ten casualties) and most of the north side has been demolished.

On the north side only Nos. 2-14 (evens) are within the Ladbroke conservation area. There was originally a terrace of nine houses (Nos. 1-18, earlier 198-214 Cornwall Road) between Ladbroke Grove and a road that has now disappeared (except for a walkway) called Camelford Road. Only Nos. 2-4 and 10-14 now survive. Nos. 6-8 were bombed during the Second World War. For a long time after the war, the site was left vacant, but in the early 1960s the current purpose-built block of flats was erected.  Nos. 16-18 disappeared completely, along with the rest of this side of the street (including a pub, the Lord Clyde), in the great housing developments of the 1970s. 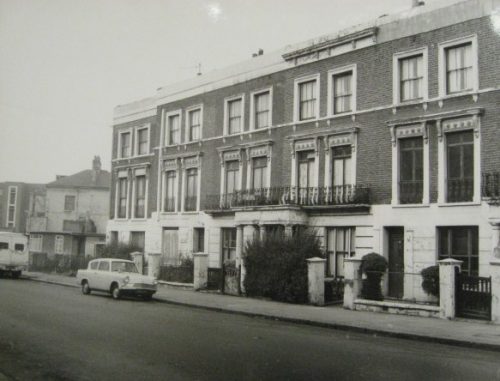 Part of the north side of Cornwall Crescent that was demolished in the 1970s. (1970 RBKC photographic survey).

The five surviving houses are full stucco, very similar to those in the neighbouring Ladbroke Crescent, which were erected by the same builder. Nos. 2-4 form the most handsome block in the street and No. 2 is the best preserved in the range, retaining its porch, decorative frieze between first and second floor and original mansard window.  No. 4 has lost its porch and the stucco ornamentation round its first floor windows. It is to be hoped that one day these features will be restored. The two houses have different cornices; No. 2 is likely to be closest to the original.  Both houses have acquired discreet mansard extensions. 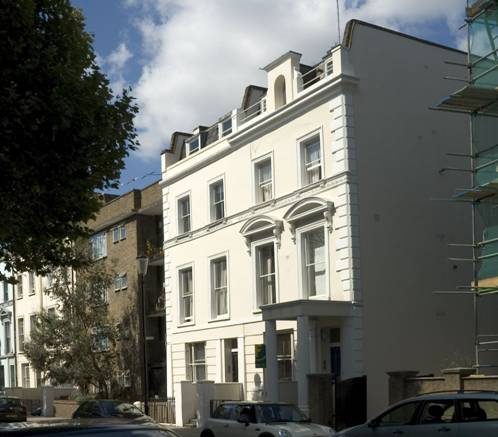 Nos. 10-14 were no doubt originally similar in pattern to No. 2, but have lost most of their decorative features over the years (this was a particularly slummy part in the mid-20th century). All three have lost their porches, although No. 14 retains its decorative frieze above the first floor and the ornamentation over its first floor windows.  All three have acquired an extra mansard floor. Nos. 10 and 12 have been joined to form flats. 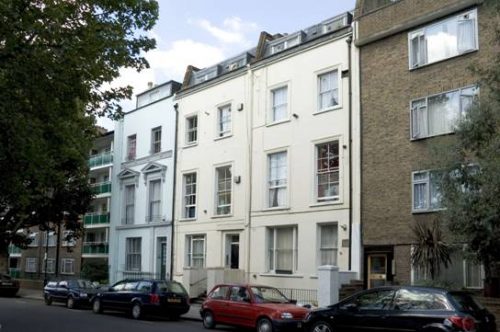 The houses on the south side were never as handsome as those on the north side, and were from the beginning interspersed with short rows of shops.

There were never any dwellings on the block between Ladbroke Grove and St Mark’s Place. Instead, on the corner of Cornwall Crescent and St Mark’s Place there used to be a Baptist chapel, built in the 1880s.  It is not clear what happened to it: it appears in the telephone directories up until 1945, but not thereafter.

Nos. 3-7 (formerly 209-213), on the other side of St Mark’s Place, were erected by a builder called P.R. Baker to whom Charles Blake granted leases in 1864-6. The houses have three storeys and storage basements and seem to have been designed to provide a short row of shops (according to the Post Office Directory, in 1901 the three shops were occupied by an oilman, a wine merchant and a tailor). They are built of London stock brick with heavy window mouldings, square on the first two floors and with semi-circular hoods on the top floor. No. 3 is a corner house with fronts on both the Crescent and St Mark’s Place.Only No. 5 has retained its original first floor window. The shops at Nos. 5 and 7 have been reconverted to residential, although retaining some of the typical Victorian shop-front brackets. Nos. 3 and 5 have acquired discreet mansard floors. All three have unattractive deep bands of stucco at the top of their façades, probably replacing decorated cornices similar to that on No. 39 (see photo below). 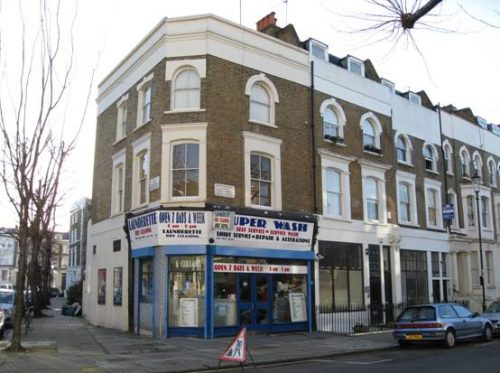 Blake granted building leases in 1864 to three different builders for this part of the street, although they all stuck to the same pattern.

Nos 9-29 (formerly Nos. 215-235 Cornwall Road) form a uniform terrace, although individual houses have lost many of their original features. In particular, all the original cornices have gone, and have been replaced mostly by ugly bands of stucco, all slightly different from each other. The look of this terrace would be immeasurably improved if the original cornices could be restored – although they might reveal more than one would desire of some of the uglier new mansard floors. 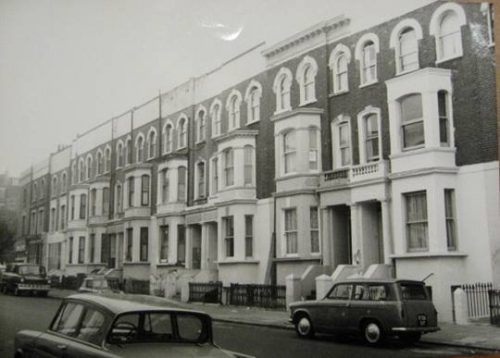 The houses between St Mark’s Place and St Mark’s road in 1970. Only the third house from the left retains its original cornice, and that has now gone. Note also the balustrade above the porches. (1970 photographic survey). 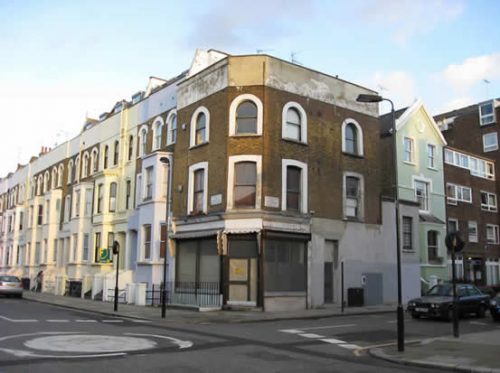 The general pattern is three storeys plus basement with shallow pilastered porches, stucco at ground floor level, bay windows on ground and first floor and windows with rounded hoods on the top floor. Two still have their original decorative moulding with guttae above the ground floor bay windows (Nos. 13 and 27). Some of the houses are wider than others and have three rather than two bays on their top floor and an extra window at first floor level (Nos. 9, 19, 21, 27 and 29). This is not obviously part of a symmetrical terrace design, so possibly the widths fluctuated with the bank balances of the builders during the construction.

A few houses (Nos. 9, 13, 15, 17, 19 and 27) retain some or all of their original worming decoration on the architraves of their porches, on the ground floor bay windows and on keystones above the ground floor windows. A couple (Nos. 13 and 27) also retain a tiny balustrade above their porches, a feature that must have been common to all the houses.    Most have good railings. The corner building, No. 31, was designed to have a shop on the ground floor and the Victorian brackets survive (although the building has probably been heavily reconstructed).

Blake gave building leases between 1862 and 1864 to no fewer than 11 different builders for the construction of this long terrace between St Mark’s Road and Clarendon Road. All the houses survive, apart from the last two, Nos. 79 and 80, which were demolished probably because of bomb damage.

Once again, the terrace starts with three shops, Nos. 33-37. Thereafter the houses are similar in size and general appearance to the previous terrace, but with slightly different decoration. The pillared porches have elegant triglyphs decorating their architraves rather than the panels of worming in the previous range; and the second floor windows have rather attractive square mouldings rather than the hooded tops of the earlier ones. Unfortunately, many of the houses have lost part of their stucco decoration, although one, No. 39, alone of the houses on this side of the street, retains what is probably its original cornice. Several of the houses have had their brickwork painted over. Nos. 35-37 and 75 and 77 have been almost completely reconstructed, No 35 completely losing its shopfront. 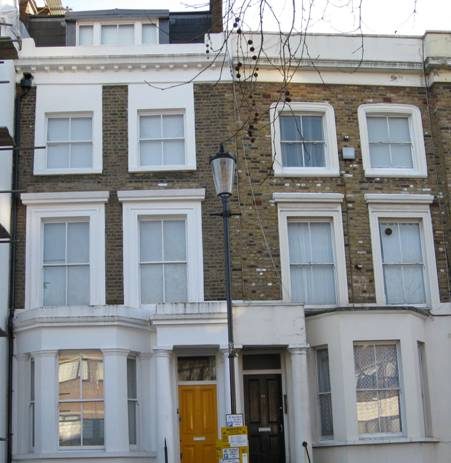 Nos. 39 and 41 Cornwall Crescent, showing the original cornice on No. 39, the only remaining one in the street – although unlike No. 40 it has not retained the original mouldings around the top floor windows. (©Thomas Erskine 2006)

Deeds in the archives

There is a fairly full set of deeds for No. 9 Cornwall Crescent (described as ‘the twelfth house to the east from St Mark’s Road in the very early ones) showing how the 99-year leasehold changed hands between 1864 and the 1890s. The builder, Kellond, soon raised a £400 mortgage on the leasehold, and when he defaulted, it went to an investment company, who then sold it on in 1876 for £550 to an architect and surveyor, Thomas Herbert Martin of 108 Ladbroke Grove, who sold it a year later to Daniel Deveson, gentleman, of Edgware Road.