What it means to be in a conservation area

The Royal Borough of Kensington and Chelsea originally designated the Ladbroke estate as a conservation area in 1969, the first one in the borough.

The main effects of designation are to bring certain duties for the Council as regards protecting and enhancing the area, and to impose certain restrictions as to what residents can do without planning permission. In the Ladbroke area, most buildings are also subject to Article 4 directions, which bring further restrictions.

The Council’s duties in relation to conservation areas

Conservation Areas are defined in legislation (the Planning (Listed Buildings and Conservation Areas) Act 1990) as ‘areas of special architectural or historic interest, the character or appearance of which it is desirable to preserve or enhance’. The local authority is required:

It is the protection of the quality and special interest of the neighbourhood or area as a whole that is intended, rather than specific buildings. For example, the history and development of the area; the layout of buildings and their relationship to each other; vistas and viewpoints; trees and open spaces (such as private and communal gardens); street furniture and street surfaces (such as cobbled mews); characteristic building materials of the area (such as stucco in the Ladbroke area); the mix of different uses of the buildings; and the design of shop fronts can all be relevant to the character of the area and may be taken into account by the Council when deciding planning applications and policy.

There are also powers for Councils and other public bodies to give grants to help preserve and enhance conservation areas, although in these straitened times these powers are rarely used.

22.3.18. The historic environment is central to the character of the borough and the Council has a duty [under Section 2 of the Planning (Listed Buildings and Conservation Areas Act) 1990] to pay special attention to the desirability of preserving or enhancing the character or appearance of conservation areas.

22.3.20. Where the quality of an area has been eroded, whether or not in a conservation area, the Council will take steps to ensure that new development and other schemes such as streetscape works improve the environment.

22.3.21. In addition, a building’s use can contribute to the character of a conservation area and to a sense of place. The borough contains a scatter of incidental mixed uses within its residential neighbourhoods, which offer variety, surprise and delight. These punctuate the street scene and add to the vitality and character of a conservation area. Their loss diminishes the character of the townscape, the cherished local scene and the vitality and diversity of the area. The Council will take account of the nature of the current or last use when assessing character.

22.3.22. The partial or full demolition of a heritage asset, or its alteration, whether it be a listed building or unlisted structure of historic or architectural merit, can cause irreversible damage to the character and appearance of our high quality townscape. The harm caused will therefore be carefully weighed up against any public benefit that might result. However, as heritage assets are irreplaceable, any harm or loss requires clear and convincing justification. Substantial harm to or the loss of a listed building, park or garden would be exceptional while that to the highest designated heritage assets would be wholly exceptional.

22.3.23. As the majority of the borough is covered by conservation areas, there are limited opportunities for new development because the presumption is to retain the original built fabric, whether it faces the street or not, where it contributes positively to the character of the conservation area. New buildings should contribute to the character and appearance of the conservation area. There have been a number of instances of inappropriate or premature demolition in conservation areas. There have also been examples of buildings being allowed to deteriorate, followed by demolition. The Council will take all appropriate measures available to it to ensure that there is no incentive for such action.

The Council’s more specific policy for the Ladbroke conservation area used to be set out in its rather curiously named “Conservation Area Proposals Statement” or CAPS, a detailed document that had a lot of interesting material on the history and architecture of the area as well as a statement of the policy. It was first published in 1976 and updated in 1979, so it was beginning to show its age. In October 2015, the Council published a replacement document called the “Ladbroke Conservation Area Appraisal” or Ladbroke CAA. The Council has made clear that it is not a policy document, but a description of the character of our conservation area so as to give guidance to residents and planners on what should or should not be preserved or enhanced. Nevertheless, Government Planning Inspectors do give some weight to what is said in the Appraisal when deciding planning appeals.

Unlike in other areas, planning permission is required (under the Town and Country Planning (General Permitted Development) Order 1995 as amended) in conservation areas for the following (with minor exceptions):

In addition, notice must be given to the Council before any works are undertaken to a tree with a trunk diameter greater than 75mm at 1.5 metres above ground level. The Council then has six weeks during which it may decide whether to serve a Tree Preservation Order. If the Council does nothing, the householder is free to proceed. If RBKC decides not to make a Tree Preservation Order it normally writes within the period to confirm that it does not object.

The above restrictions apply in all conservation areas. In addition, Article 4(2) of the Town and Country Planning (General Permitted Development) Order gives local authorities the power (subject to approval by the Secretary of State in some cases) to make what are known as “Article 4 Directions” in respect of individual buildings, further restricting what can be done without planning permission. RBKC has imposed a large number of Article 4 directions in all its conservation areas in order to give them added protection.

No fees are payable to the Council for planning applications that are necessary only because of the existence of an Article 4 direction.

Planning permission is not normally needed for alterations to the interior of a building in a conservation area unless it is listed or changes in the number of dwellings are proposed (either sub-dividing into flats or merging flat to create a maisonette or single house). Most of our buildings were constructed during a period when elaborate internal cornices and wrought iron banisters were in fashion. In listed buildings, these are protected and cannot be changed without listed building consent (which is unlikely to be given). But the lack of protection in unlisted buildings means that many of these internal features have been lost, especially with the current fashion for minimalist décor. We regard this with great sadness. Minimalism is only a fashion (and one moreover that can, by a good architect, be combined with Victorian cornices and ironwork), and we believe that there will be much regret in the future over the loss of these historic elements. So we appeal to all residents of the area to preserve the historic features inside their houses.

Applying for planning permission in a conservation area

The first step for anybody planning alterations to a building in a conservation area should be to check whether the house is listed or subject to an Article 4 direction, and if relevant whether its roof is part of an important roofline or a planned extension would obscure an important gap or vista.

If – as in most cases – planning permission is needed, the RBKC website

provides a useful step-by-step guide to obtaining planning permission. The Council offers a paid advice service, and for anything at all complicated it might well be worth using this. But for simple changes it should not be necessary, especially if you are employing an architect who knows their way around.

Planning permission is unlikely to be given if the proposed works are against planning policy – and that includes central government, London-wide and local planning policy, including the CAPS.. If on the other hand you can show that your proposal is in accordance with planning policy, then it will be difficult for the Council to refuse it unless there are exceptional circumstances.

The Council encourages all applicants to inform and consult their neighbours about their plans at an early stage. Not only is this a matter of simple courtesy, but if you have your neighbours’ comments, you may be able to make minor amendments to your plans which will head off formal objections from the neighbours, thus making permission easier to get. Moreover, all the evidence suggests that, if the neighbours are properly informed and consulted in advance, this creates a much better climate during the construction phase, when what you are doing may be causing quite a lot of inconvenience to your neighbours.

Many of our buildings were neglected and fell into disrepair during the first half of the 20th century, or suffered bomb damaged and were badly restored shortly after the last war. As a result, quite a few of the buildings in the area have lost some of their external decorative features – porches, mouldings around the windows, string courses, balustrades, ironwork, top cornices etc. When residents are considering alterations to their houses or flats, we very much hope that they will, if they can afford it, restore such lost features if there are any missing from their houses. We are encouraged by the fact that, over the last few years, quite a few owners have done just that.

The photographs below show an example of what can be done. The house (in Clarendon Road) in the centre of the photographs below was damaged by a bomb in the Second world War and reconstructed in a jerry-built fashion after the war, as shown in the first photo taken in 2006. Its original features, including porch, cornice and window decoration, have now been beautifully restored, so that it matches the other houses in the terrace – see bottom photo. 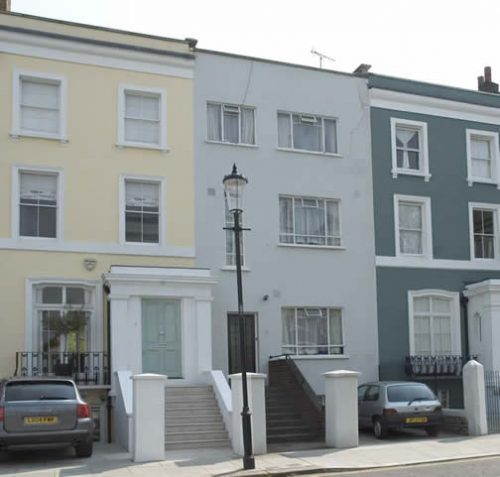 We are undertaking an inventory of streets, describing their history and architecture and suggesting what lost features householders in that street should consider restoring.