Only part of the westernmost section of Westbourne Park Road is in the Ladbroke Conservation Area. On the northern side, Nos. 280-352 evens (between Portobello Road and Ladbroke Grove) are in the conservation area; and on the southern side only Nos. 305-317 odds (between Portobello Road and Kensington Park Road) are in the area. The section on the southern side between Kensington Park Road and Ladbroke Grove is a modern housing estate. When the conservation area was delineated, it was decided to exclude this block.

The part of Westbourne Park Road between Portobello Road and Ladbroke Grove seems originally to have been called Somerset Road. The terrace of houses on the northern side, however, had its own name – Edmund or Edmund’s Terrace. By the time of the 1863 Ordnance Survey map, however, the road was being called Cornwall Road and in 1872 the name Edmund Terrace disappeared. The road assumed its present name and numbering only in 1939.

This part of the Ladbroke estate was the last to be developed. In 1847, a convent of the Poor Clares was established at the south-western end of what is now Westbourne Park Road, in its own large walled garden. At the time, the site was described by the journal Building News as a ‘dreary waste of mud and stunted trees’, apart from ‘a melancholy half-built church’ (All Saints in Talbot Road) and ‘a lonely public house’ (the Elgin). According to the paper, a number of ‘low Irish’ had settled nearby and there had been ‘a plentiful crop of Romish conversions there’. More on the convent. 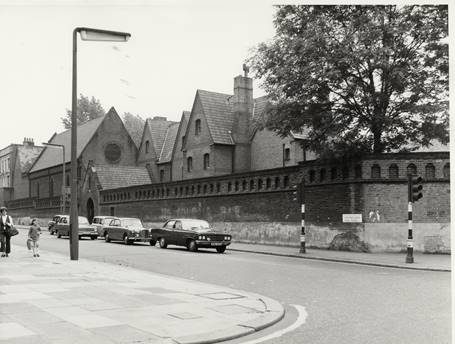 The convent, seen from Ladbroke Grove just before it was demolished (courtesy RBKC)

For more than a decade, the convent and the pub remained alone. It was a period of financial crisis for developers, and it was not until the early 1860s that any other buildings were erected.

The northern side consists mainly of one long terrace of half-stucco houses with decorative coursing in the stucco. They all were all built with porches and have either flat or triangular architraves above their first floor windows. They stand three storeys high and have basements and front lightwells, with tiny front gardens. 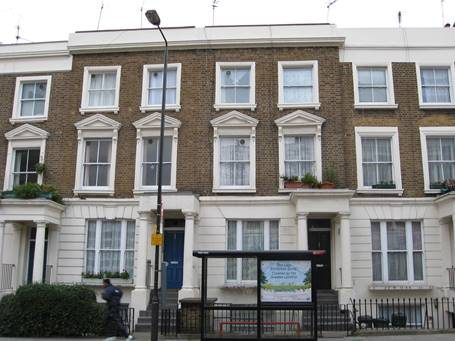 Typical houses on the northern side.

Where there was a public house, the tendency was to start building next to the pub (which often served as a sort of office for the builders) and the first houses to be built on the northern side were the current Nos. 336-352(evens), the present No. 354 being part of the pub. They appear on the 1863 Ordnance Survey map but not in the 1861 census, and a deed in Kensington Central Library (No. 26094) indicates that they been built around 1860-61. On completion they were let on 99-year leases for ground rents of 7-8 guineas. Between Nos. 316 and 318 there is an archway through to Elgin Mews.

This first part of the terrace forms a near symmetrical whole. The five houses nearest the pub (Nos. 344-352) and the last four houses (Nos. 316-322) stand slightly forward of the others, as “bookends”. They also have flat topped architraves above their first floor windows (although not all survive), whereas the intervening houses have triangular ones (although again most are missing). The rest of the terrace (Nos. 282-320) was probably built shortly afterwards. This was from the beginning a much less prosperous area than the streets further south. Already by 1871, most of the houses were accommodating two or three households and there were very few live-in servants.

Nos. 282-314 form a series of different groups, each slightly different in height, even though the ground here is pretty flat. It was quite common for different plots in a terrace to be let to different builders. While each had to abide by a pattern laid down by the landlord, what each built was often not completely identical.  One cannot help suspecting that one of the corners some builders cut when money was tight was to make the storeys slightly lower in height. This may be what happened here. They were probably built in the early to mid-1860s. Even though each group is slightly different in height, it seems that the intention was that here also there should be a symmetrical terrace, as the houses at either end have (or had) flat architraves over their first floor windows, whereas the intervening ones have triangular ones. 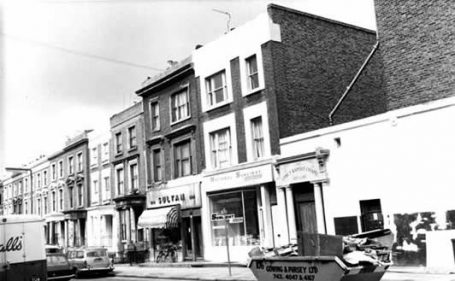 Nos. 282 and 284 form a group of two and were designed to have shopfronts, as they were no doubt seen as part of the market area. They stand slightly forward of the rest of the terrace with a different pattern of fenestration, as can be seen from the photograph above.  About 10 years after that photograph was taken, No. 284 was demolished, possibly because it was in a dangerous state, and the present building erected in its place, to much the same pattern although without the cornice and dressings on its windows – which are also missing from No. 282.

Nos. 286-288 form a matching group of two obviously both built at the same time and by the same builder. No. 290 is slightly lower and was probably built separately. We have yet to find any old photographs of these houses but it is possible that they originally had flat architraves over their first floor windows. Nos. 292-294 stand slightly forward of No. 290 and again may have been part of a planned symmetrical effect. They retain their triangular architraves at first floor level.

Nos. 296-302 form yet another matching group, slightly different in height; all probably had triangular architraves at first floor level. No. 300 was taken over in 1975 by an organisation called Caribbean Cultural International as a cultural centre specialising in the dissemination of information and literature of African history. The building was named Karnak House (and still has a Nilotic design on its façade) and their operations included a small publishing house, Karnak House Publishers, specialising in books by African and Caribbean writers or on African and Caribbean themes. Karnak House Publishers still exist (in 2017), but have moved elsewhere.

The present No. 280 was probably at the beginning no more than an open covered passage through to a hall which was called Cornwall Hall at the time of the 1893 Ordnance Survey map. Shortly before the First World War, the hall became the Beulah Strict Baptist Chapel. There was also a small two storey residential cottage belonging to the chapel. The Baptists sold the property in the early 1990s and in 1993 it was converted to residential use by Richard Curtis, the author of the screenplay for the film Notting Hill, and his wife Emma Freud – although not before a brief occupation by squatters who used the premises as an art gallery and gave noisy rave parties.

At some stage before the 1971 photograph above, an entrance door flanked by double pillars was put across the mouth of the passage. This was later painted blue and became famous as the “blue door” in the movie Notting Hill. It became such a tourist attraction that the subsequent owner, tired of fighting her way through the crowds of tourists, sold the door at auction in 2000 for £5,750 and put a new door in, painted black.

Nos. 282-352 (evens) were originally numbered Nos.1-36 (consecutive) Edmund Terrace, running from west to east.  No. 380 was treated as a passageway and originally had no number; nor did the present No. 254, possibly because it was treated as part of the Elgin Arms.  In 1872, the current Nos. 282-352 became 124-194 (evens) Cornwall Road (running east to west), and the house next to the Elgin Arms became No. 196. Then in 1939 these houses all gained their current numbers as part of an extended Westbourne Park Road and the present No. 280 was also given its number. 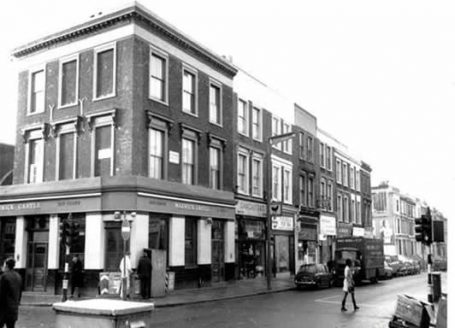 The west side of Westbourne Park Road from Portobello Road in 1971.   Courtesy RBKC

The first houses to be built on this side (apart from the convent) were Nos. 305-317 (odds), dating from around 1860, as the 1861 census records three occupied houses next to the Castle pub, and four of the seven are already shown on the 1863 Ordnance Survey map. The map shows no front gardens or front areas, and they were clearly built to have shopfronts on their ground floors. The builder was Paul Felthouse (Survey of London, although the evidence of the census indicates that that work is erroneous in suggesting a building date of 1863), who also built the Castle pub next door. Now the whole of this block is occupied by the builders’ merchants Nu-Line. The buildings have two floors above the shop-fronts, brick with stucco dressings round the window, much of the stucco now missing. Nu-Line has extended round the corner in Kensington Park Road and has decorated the windows on the corner building. 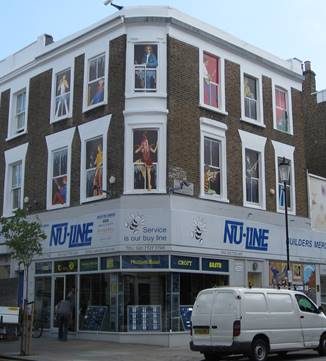 At the time these houses were built, they were numbered Nos. 1-7 (consecutive) Castle Terrace, no doubt after the pub.  In 1872, the individual terrace names were abolished, there was a complete renumbering of the road and these houses became Nos. 161-173 (odds) Cornwall Road. Finally in 1939 they gained their current numbers when the road became part of Westbourne Park Road. 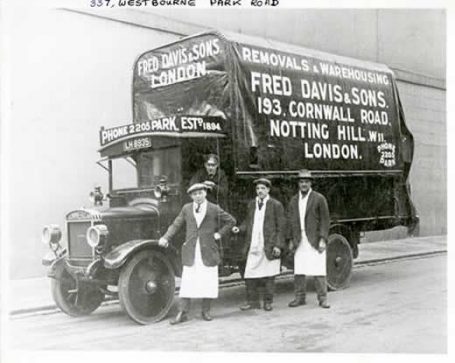 No. 193 Cornwall Road (later 337 Westbourne Park Road) was one of the houses to be demolished. Courtesy RBKC