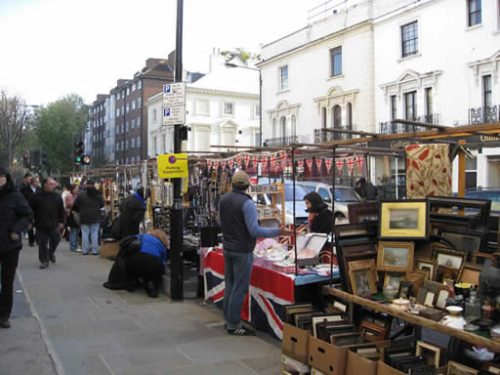 The Westbourne is one of London’s lost rivers. It was a stream that ran down from Hampstead into the Thames, passing not far from Westbourne Grove, crossing what is now the beginning of Bishop’s Bridge Road. Today, it runs entirely underground except where it emerges above ground near Lancaster Gate to become the Serpentine.

Until the mid-1900s, this block of Westbourne Grove was farmland, part of the large rural estate that had been purchased by the Ladbroke family (rich bankers) in the mid 18th century.  After the death of James Weller Ladbroke in 1847, it was sold by his nephew to a solicitor turned speculator called Thomas Pocock. Pocock sold it on immediately to another speculator, the Rev. Brooke Edward Bridges (this was an era when property development was a popular activity for rich clergymen). Pocock continued to be involved, however, as an agent for Bridges and eventually bought back the site sometime between 1852 and 1855.  The houses there now were all built in 1851-2 by or under the supervision of Pocock, according to the Survey of London.

This was a commercial area and these houses were built with shop-fronts straight onto the street with no front garden or basement lightwell.  The 1861 census records among others a fishmonger, a grocer, an undertaker and a bread and biscuit-maker. The upper floors were sometimes occupied solely by the shopkeeper and his family, but in several of the houses more than one household was recorded as living there, some no doubt renting a floor or a room.

Its subsequent history follows that of the Portobello market, of which it is effectively a part. In the 1970s and 1980s, several of the shops serving the local community were transformed into antique arcades open only on Saturday, to such an extent that the Council worried about blank facades spoiling the look of the street, and the remaining shops complained about the absence of passing trade on other days of the week. Wallace Lipka, owner of four of the shops, was probably the first to begin converting to arcades and gave his name to the main one, on the corner of Portobello Road. By 2009, however, antiques were no longer so popular and the then landowner decided – despite huge local protests – to convert Nos. 282-292 Westbourne Grove into a single retail space, revamping the façade in the process. This is now (2016) occupied by a branch of the clothes store AllSaints. The pavement antique stalls that used to set up outside these shops were also dispossessed, although the Council has now allowed stalls on the carriageway on Saturdays. 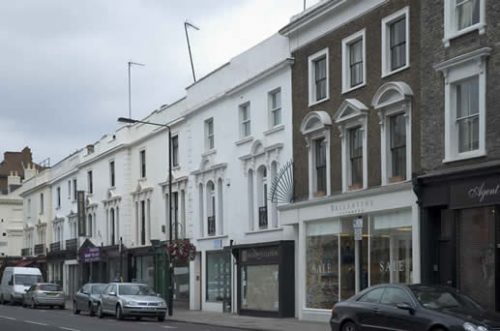 The south side is particularly well-preserved. Nos. 283-301 odds form a handsome symmetrical terrace, the pair of houses at either end and the central pair set slightly forward. The pairs of houses also have alternating decoration above their three light first floor windows, the end and middle pairs with semi-circles and round window-heads and the ones in between with triangles and squared window heads. All are full stucco and have three storeys and no basements. They do, however, have small forecourts, in the case of Nos. 283 and 285 with their original York stone. There are solid parapets along the roof; originally there were probably bottle balustrades. Nos. 285, 287 and 289 have ironwork balconies on their first floor windows, probably not original (in 1987 photo shows No. 287 to have a much lower and more original-looking plant restainer rather than a balcony railing).

No. 285 still has its original Victorian corbels on either side of the fascia. It was until the early 2010s the E.J. Barnes cycle shop, which had been operating on the site for over a hundred years. The Archer Street Club, the cycling club founded in 1926 which counts a number of national, international and Olympic champions among its members, used to meet above the shop.

Nos. 303 and 305 are rather different and may have been put up at a slightly different time by a different builder. Their upper floors are brick rather than stucco ( although it is possible that Nos. 283-301 were also brick to begin with), and they have different stucco window dressings. No. 305 also has an extra floor, matching the corner house (No. 120 Kensington Park Road) in height and design (so it was probably built as part of a block with No. 120. They have basements, but No. 305 has no forecourt. The latter retains its corbels on either side of its fascia and an extra corbel at the top of the building.

A theatre was constructed behind No. 291 in 1863, and the entrance was through No. 291. The theatre continued operating until 1963, under a variety of names, most recently the 20th Century Theatre.
More on the theatre. 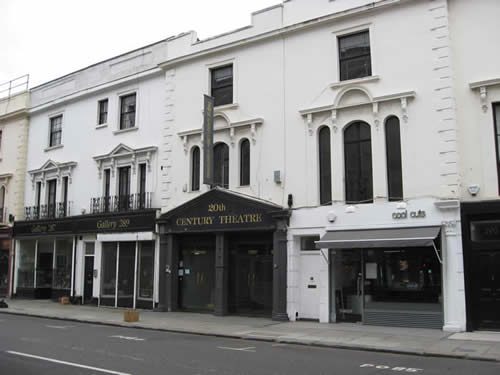 Both No. 291 and its neighbour No. 293 are listed Grade II. The English Heritage description is:

Theatre. 1863. Formerly ‘Victoria Hall’. Renamed ‘Bijou Theatre’ in 1866. Auditorium survives as a rare example of the hall type with gallery across one end. The entrance foyer with original moulded plaster ceiling also survives. 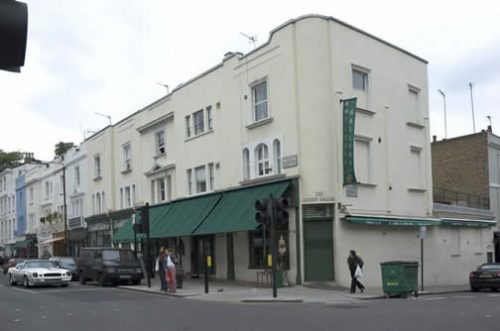 The northern side is much less well preserved. Nos. 282-300 evens form a matching terrace to Nos. 285-301 on the southern side. But almost all the houses have lost their stucco window dressings; the sole survivor is No. 296.

Nos. 282-292 were given a complete makeover in about 2010 which got rid of the few remaining bits of decoration on those houses and replaced them by uniform round-headed windows – although a bottle balustrade was reinstated along the roof. No. 282 (on the corner of Portobello Road) used to be the entrance to Lipka’s Arcade, one of the largest and best-loved antique arcades in the market. 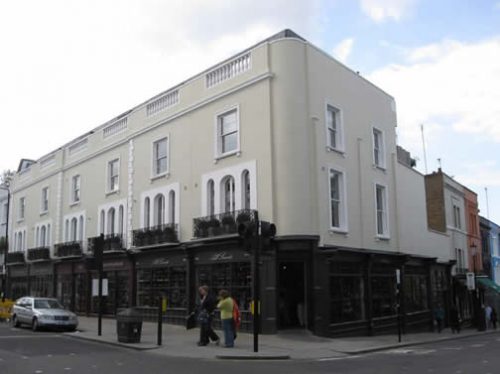 The houses on this side all have fore-courts and basements originally inaccessible from the street, although the fore-courts in front of Nos. 300 and 304 have been dug out to provide a stairway to their basements. Nos. 298 and 300 retain their original fascia corbels.

Nos. 302 and 304 form a quirky ensemble. No. 304 was the home of the Alice S. G. Brown Welfare Centre (also known as the Archer Street Infant Welfare Centre), founded in 1918 (wnen it first opened, it was on the other side of the street next to the theatre, but moved a few years later).. Alice was the wife of Sidney George Brown, an electrical engineer and inventor who with Alice founded the eponymous company S. G. Brown Ltd in 1910/11. The company was very successful and became inter alia one of the world’s largest manufacturers of naval gyrocompasses (it also branched out into audio equipment and is said to be the first to use the term “loudspeaker”). The Browns were based in the area, at 52 Kensington Park Road (in a house which was demolished to make way for the present mansion block). At the time Alice founded the centre, North Kensington was notorious for its high infant mortality. The centre later moved to the National Health Service which continued to use the building until 2005. It was subsequently converted to mixed commercial and residential use. 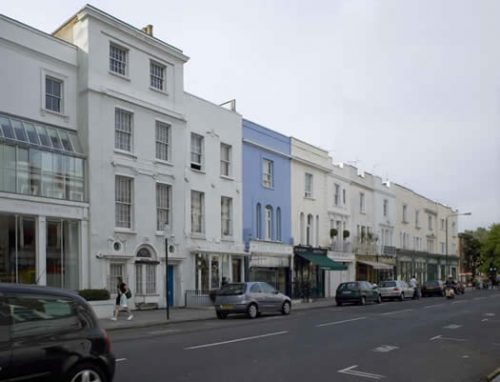 The northern side in 2006, with the old Infant Welfare Centre in the foreground. The building on the extreme left with the raised conservatory is the former No. 306, now part of the neighbouring Paul Smith shop at 122 Kensington Park Road.

After the foundation of the Centre, the building (which is listed as a “significant building” in the Ladbroke Conservation Area Appraisal) was given a pebble rendering, with the moulded legend “Archer St. Alice S. G. Brown Welfare Centre founded 1918”. There is geometric art deco decoration, for instance round the ground floor windows and door,  but also in a somewhat odd combination cherub’s heads and swags. No. 302 is similarly decorated, so the two houses form an ensemble. Like No. 305 opposite, No. 304 has an extra floor, possibly a later addition. The fenestration retains its Victorian proportions, but with out-of-character multiplane windows probably installed when the building was given its art deco makeover. There used to be a distinctive projecting central window at ground floor level, probably installed at the same time. This was removed and replaced by the present window in about 2013, when the lightwell was also dug out. 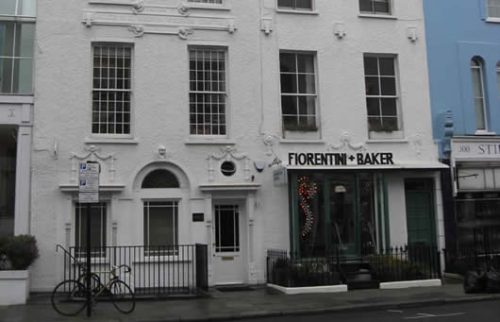