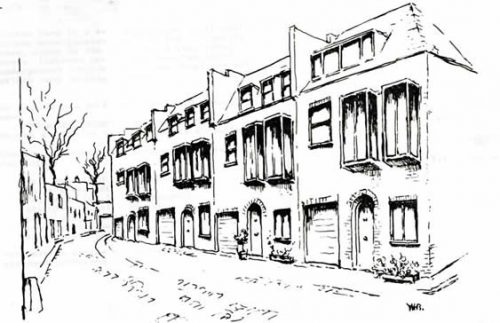 Vernon Yard is a small L-shaped mews with its entrance under an archway between 117 and 119 Portobello Road. It was known as Vernon Mews until 1932 when the name was changed to Vernon Yard. It runs behind 119-141 Portobello Road. This terrace of shops was originally called Vernon Terrace, after the British Admiral Edward Vernon (1684-1757), who was responsible for the capture of Porto Bello (Mount Vernon, the home of the first American President, George Washington, was called after him because Washington’s brother served under Vernon). Vernon Mews served the shops on this terrace and undoubtedly took its name from the terrace.

Vernon Yard must have been built at the same time as Vernon Terrace, in the first half of the 1850s. The 1863 Ordnance Survey map shows two numbered units (Nos. 1 and 2) at the southern end of Vernon Yard; a further eight units (Nos. 3-10) along the western side) and one (No. 11) at the northern end. These were almost certainly stable blocks with accommodation above. On the eastern side, the map shows a number of unnumbered units which were probably warehouses or stabling belonging to the adjoining Portobello Road houses. The 1871 census shows only three families living in the mews – a labourer and laundress with seven children at No. 7; a coachman at No. 9; and a carman at No. 11. The 1901 census shows only two families, at Nos. 9 and 11 (the heads of family being respectively a carman and a general dealer), and there is a note to say that “all other stabling in Vernon Mews has been converted into hay and store storage”.

The buildings in Vernon Yard continued to be largely used as warehousing or garages until the 1960s. In 1964, there was only one resident, living in a small flat above a garage at No. 1. Planning documents described the mews as “a mixture of dilapidated 2-storey properties which are used for storage purposes. Nos. 5, 6 and 7 are a builder’s store and workshop. … Nos. 2 and 3 were recently used in part as a wholesale grocery store, but have otherwise been used as a corn merchants”. The builder at Nos. 5, 6 and 7 was S. Nash and Son, who moved there when their lease of the premises that they had occupied 100 Kensington Park Road for the previous 90 years came to an end in 1967 (it is now part of Waterford House).  They remained there until about 1990 and were presumably responsible for remodelling the premises to form the present striking building. 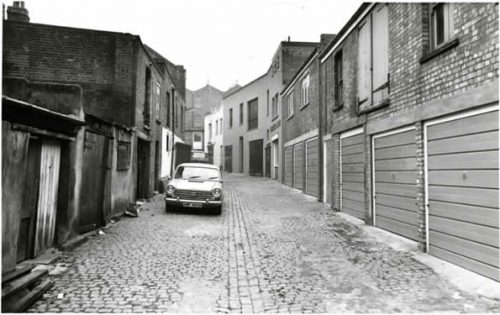 1972 photograph of Vernon Yard looking south. with S. Nash and Son beyond the garages on the right side. Courtesy RBKC

In 1972, the newly founded Virgin Records, then a mail order record company, took over Nos. 2, 3 and 4 for office and warehouse accommodation, and they continued to occupy the building for almost 20 years. They also took over the old Nash premises at Nos. 5-7 Vernon Yard (still a single unit) when Nash left. Both sets of buildings have over the years been substantially remodelled and enlarged by extra storeys. 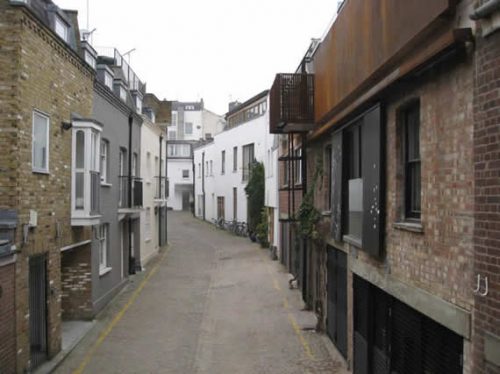 Looking south down the mews in 2016

In the early 1990s, Nos. 8, 9, 10 and 11, former stables that had been converted into garages, were largely rebuilt to form a new single residential unit. It has now been further developed by its architect owner with some interesting modern materials. This long shallow new house was renumbered No. 9 in 1995 and there are now no Nos. 8, 10 or 11. New flats, accessed from Vernon Mews, were also created at the end of the mews out of the rear portions of houses in Portobello Road, now numbered Nos.13 and 13A. 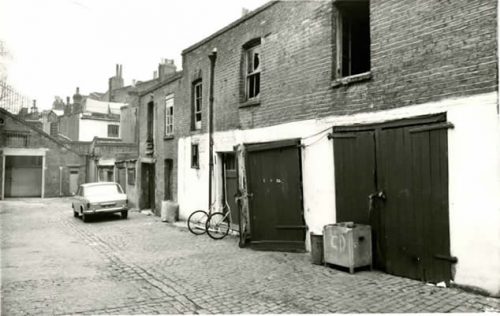 The eastern side consisted by the 1970s of yards or warehousing belonging to the shops in the Portobello Road, ripe for development. The four houses at Nos. 17-20 were the first to be built on this side: they were erected in the 1970s, in the place of a demolished warehouse then known as No. 14 Vernon Yard. The present No. 14 was built in 1990 on the site of what was described at the time as some hard standing behind No. 135 Portobello Road (it was formally given its number in 1992). Nos. 15 and 16 were built in the mid-1990s on the site of what was described in planning documents as “rather unkempt hard-standing” used for car-parking behind Nos. 129-131 Portobello Road. 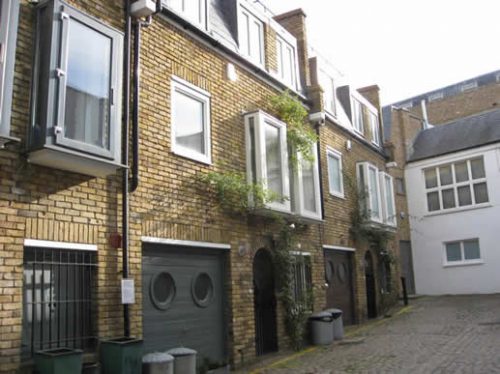