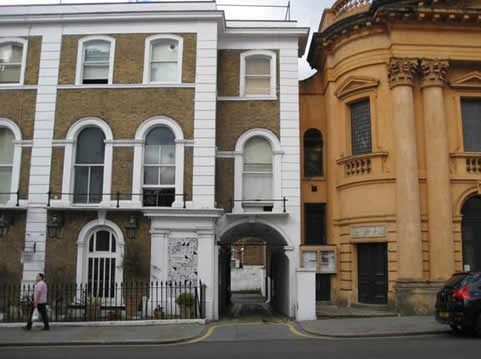 The entrance to the old Stanley Gardens Mews between St John’s church and No. 92 Kensington Park Road

Almost all that remains of the old Stanley Gardens Mews is the entrance through an arch on the left side of St Peter’s church in Kensington Park Road, together with a stretch of the old cobbles under the arch. There is also some attractive ironwork decoration under the arch. 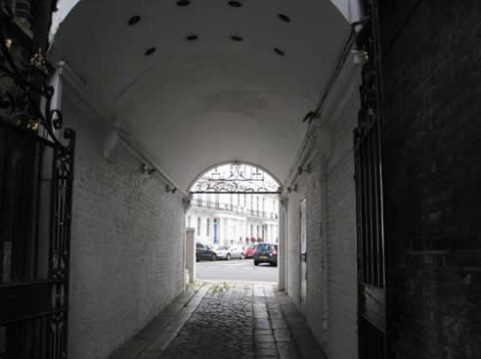 The passageway through the arch seen from the inside. Note the cobbles and granite setts; and also the ironwork decoration under the entrance arch.

It was a standard mews, both sides lined with small units, stables with accommodation above, running behind the Victorian terrace at Nos. 92-110 Kensington Park Road. There were 15 units in all. They were probably built in 1861 at the same time as the houses in this bit of Kensington Park Road, as the mews appears on the 1863 Ordnance Survey map. At the time of the 1911 census, there were 10 households living in the mews, occupying either two or four rooms (the latter were probably families who had taken over the stables below as living accommodation).  Four of the heads of household described themselves as cabmen, including one “motor cab driver”. There were also a market porter, a general labourer, a shopman, a barman, a groom and a house painter. 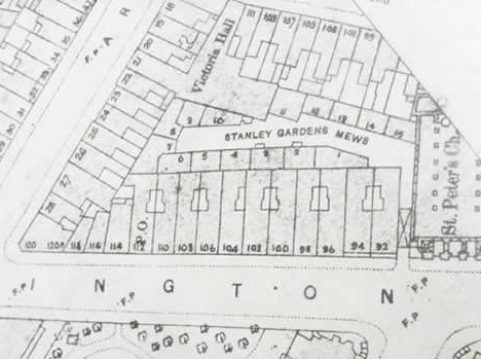 Map of Stanley Gardens Mews in 1935

By the end of the Second World War, the Mews was in a pretty dilapidated state. Nos. 11 and 12, the two houses immediately behind the 20th Century Theatre (formerly the Victoria Hall) belonged to the theatre and had been used as dressing rooms and to store stage scenery. But according to planning documents, by 1954 they were dilapidated and unused; No. 13 was being used as a motor repair business; and only Nos. 14-15 still had people living on the upper floor, the ground floor being used by “barrow boys”. The others were either derelict or had been demolished, and the area had become a candidate for slum clearance (a programme to clear derelict areas and build new housing), although this does not seem to have been taken forward.

Most of the Mews was finally swept away when Nos. 98-112 Kensington Park Road were demolished in the 1970s to make place for Waterford House, the modern block of flats that now stands there. the northern end of the mews is now part of the car-park and service area for the Waterford House flats. A rump remains, however, behind the restaurant and flats at Nos. 92-96 Kensington Park Road.. The flank of St Peter’s church gives onto the mews at the southern end. 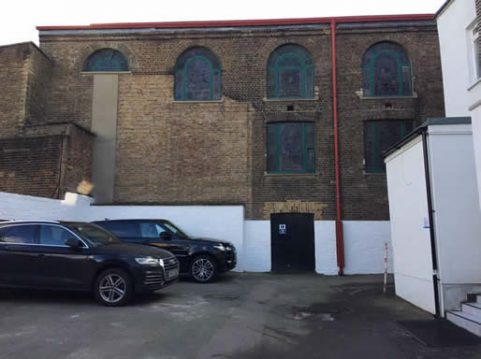 The side of St Peter’s church seen from the Mews.