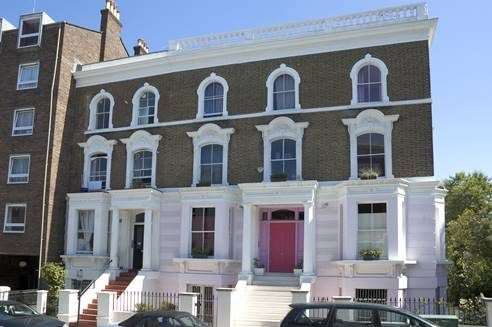 2 St Mark’s Road on the left. The corner-house on the right is 60 Blenheim Crescent. ©Thomas Erskine 2006

Only the southernmost block of St Mark’s Road is in the Ladbroke conservation area, between Blenheim Crescent and Cornwall Crescent. It was one of the last parts of the Ladbroke estate to be developed – on the 1863 Ordnance Survey map the street is shown as no more than an outline.

A terrace of five houses, Nos. 1-9, was erected shortly thereafter on the western side – the developer, Charles Blake, gave leases to a builder called Philip Baker in 1865. They had three storeys plus basement. They were quite severely damaged during the Second World War, and by the 1960s planning documents record that only No. 1, the most southerly house, remained. It was then decided in 1967 to demolish what remained of the terrace and build the present large modern building, as an adult training and day centre for people with learning disabilities. It provides an essential service, but is one of the least attractive buildings in the conservation area and one of the few to be characterised as “negative” in the Conservation Area Appraisal (CAA).

There were never more than two houses on the eastern side. No. 2, at the southern end, was probably built around 1863 at the same time as No. 60 Blenheim Crescent, the next door house; and No. 4 at the northern end of the block, built by C. A. Kellon, a builder from Paddington, to whom the developer Charles Blake gave a lease in 1864. Both are handsome stucco houses with three storeys plus a basement. 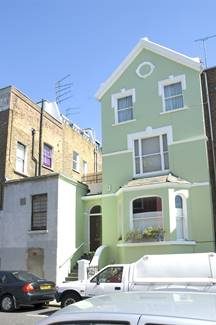 In the 1860s, the speculator Charles Blake, who was responsible for the development of a large part of the northern section of the Ladbroke estate, felt flush enough to donate the site between these two houses to the Church Commissioners. They commissioned the building of a large church in highest Victorian gothic style, designed by E. Bassett Keeling, the architect of St George’s Church on Campden Hill. It was closed in 1971 and demolished along with its church hall, after the Church Commissioners had decided that it was surplus to requirements and should be sold it for redevelopment. 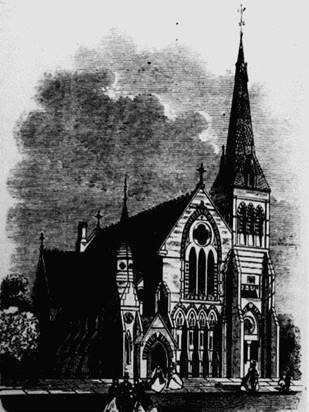 Building News described the church in 1869 as ‘an atrocious specimen of coxcombry in architecture’. According to the Survey of London, this verdict appears to have had some effect on subsequent opinion, for by the turn of the century Bassett Keeling’s design had already suffered considerable modification, and the church was by the time of its demolition only a fragment of the strange and original building which it once was.

Now, its former site is occupied by Piper House, a large brick building, purpose-built to provide accommodation, care and support for people with learning difficulties. Like the training centre opposite, architecturally the building is not an asset to the conservation area and is one of the few to be characterised as “negative” in the Conservation Area Appraisal (CAA).