St John’s Gardens consists of most of the horseshoe-shaped road that runs round St John’s church, together with the road that runs down from the church to Clarendon Road. The latter was originally known as St John’s Road, although by 1923 it had become St John’s Gardens. The road is bordered almost entirely by the railings of the neighbouring communal gardens or the sides of the back gardens in neighbouring streets. There were only two houses with an address in St John’s Gardens, both in the semi-circular section facing the back of the church, but since 2017 a third has been added – St John’s House, which used to be 59-61 Ladbroke Grove..

The straight part of the street has good vistas at both ends, looking up towards St John’s Church and down towards houses in Clarendon Road. 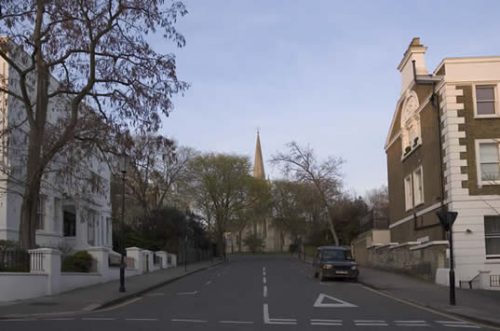 St John’s Gardens looking up towards the church

Nos. 1 and 2 St John’s Gardens form part of a trio with No. 44 Lansdowne Crescent.  Indeed, until a renumbering in 1925, all three houses were considered to be in St John’s Gardens and No. 44 was known as No. 3 St John’s Gardens. All three were built by William Reynolds, a builder turned developer to whom James Weller Ladbroke (the freeholder) and Richard Roy (the developer) gave a lease in 1846 at a ground rent of £5 for each house (deed 4884 in Kensington Public Library). They are handsome half stucco houses, as well decorated on their rear elevations (also half stucco) as on the front. They are very similar to the houses built by Reynolds around the same time at 15-27 odds Lansdowne Road. 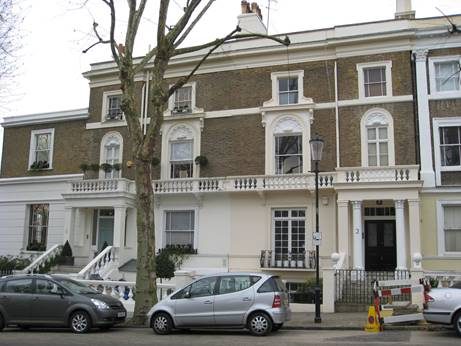 No. 1 presents as a double-fronted house. The left-hand wing has been altered considerable – the 1863 map (see below) shows that it was then flush with the front of the house rather than set back.The porch of No. 1 has also been altered several times over the years. It may originally have been similar to that on No. 2, but by 1861 had acquired an enclosed porch that was subsequently extended. The result was a porch enclosed with glass, the door to one side and two flights of steps – see drawing below.  There is a similar porch at 17 Lansdowne Road and it is rather sad that this bit of high Victoriana has been lost. The old porch can be seen in a photograph in the London Metropolitan Archives, as can the doors to a garage under the house to the left of the porch (other drawings and images are in planning case No. 1419 of 1915 and No. 1642 of 1923 in the Kensington Public Library). The present porch was built in the 1970s and is probably closer to the original, although it is unlikely that the latter had bottle balustrades down in steps. 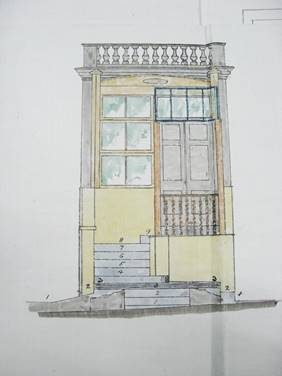 The glass porch on No. 1 – drawing from old planning document Courtesy RBKC.

The then owner of No. 1, Mrs Vane Sutton Vane, converted the house into four flats after the Second World War, together with a fifth flat for her own use. In 1962 her son received planning permission for three pre-fabricated garages in the back garden. In 1971, consent was granted for the three upper floors to be converted back to a single dwelling, with two self-contained flats in the basement.

No. 2 has had changes to its fenestration and the stucco semi-circular projection behind is a 20th century add-on. It was from 1921 to 1948 the home of a prolific painter called Frank Emanuel (1865-1948) who was best known for his strong opposition to all forms of modern art. In Who’s Who, he listed among his recreations the exposure of dealers, artists and critics who supported what he called the “modern art swindle”. His works are in a number of national collections, including the Victoria and Albert Museum. 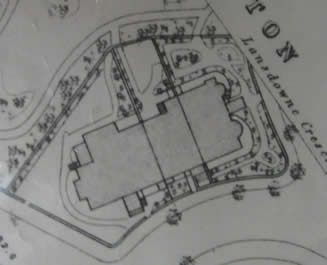 These houses have mainly bottle balustrades along their street boundaries. It is unusual (although not unknown) for half-stucco houses of that period to have such balustrades – railings would be more normal – and it is possible that there were originally railings.

The building was part of a terrace in Ladbroke Grove built in the early 1840s on a field called appropriately “Hilly Field”. It consisted of a range of nine houses (Nos. 41-57) facing Ladbroke Grove, with at each end two houses (nos. 37-39 and 59-61) set at right angles and facing on to the two side streets, “bookending” the central terrace. All the houses had four storeys plus basements with stucco at ground and lower ground floor level. They were designed by the architect James Thomson (who also designed 1-6 Lansdowne Walk; Nos. 16-26 and 31-39 Clarendon Road), in a typically unadorned style harking back to the Georgian era.

The 1863 Ordnance Survey map shows Nos. 59-60 as one single big house with a central projecting porch on St John’s Gardens. However, the 1851 and 1861 censuses indicate that they were two dwellings, then Nos. 12 and 13 Lansdowne Terrace. By the time of the 1893 Ordnance Survey map, No. 61 had been built out to achieve the current conformation and presumably had its front door next to the front door of No. 59 where there is now a window. According to planning documents, the two houses became a single block of flats in the 1950s and they have since remained conjoined with one single entrance.

The part of St John’s House that was No. 59 Ladbroke Grove has always had an enormous garden on the Ladbroke Grove side. Richard Roy, the developer responsible for this range, moved into No. 59 himself in the later 1840s and that may explain why the house was given such a huge garden. From about the 1870s until his death in 1907, No. 59 was the home of the splendidly named barrister Catchick Wise Arathoon. He was born in British India of a prominent Armenian family and after admission to the Calcutta Bar came to Britain and was admitted to the English Bar, appearing frequently in tricky Indian cases. He was the Hon. Secretary of the East India Association (which promoted the interests of the sub-continent) and was also a supporter of Mahatma Gandhi when the latter was campaigning in the early 20th century to improve the conditions of Indians in southern Africa. A newspaper reference gives Arathoon’s address as “Lawn House”, so that may have been an early name for this house, no doubt on account of the lawn in the large garden.