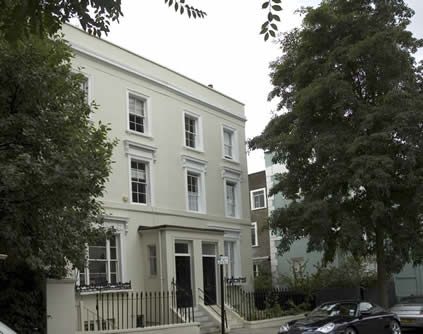 Rosmead Road is a short link road that runs between Elgin Crescent and Lansdowne Road. It runs between two of the communal gardens that separate these roads: the Rosmead (formerly the Lansdowne and Elgin Crescent) Garden to the north-east and the Montpelier Garden to the south-west. The road was originally called Chichester Road; it acquired its present name around 1900, probably after Sir Hercules Robinson, 1st Baron Rosmead, a distinguished British colonial administrator (chiefly in the Far East and South Africa), who died in 1897.

There are only two houses in Rosmead Road, somewhat curiously sited so that they encroach on the space that would otherwise been part of the gardens of Nos. 117, 119 and 121 Elgin Crescent. The whole block was part of the land acquired in around 1850 by the developer Charles Blake. He granted building leases of Nos. 1-2 Rosmead Road to a builder called James Emmins in 1851, the same year that he gave leases of 117-145 Elgin Crescent to another builder, so these houses were all built around the same time and it is far from clear why Blake created this little plot for Emmins, curtailing the gardens of the three Elgin Crescent houses. There was a failed attempt to demolish them and replace them by a block of 12 flats in 1936.

The two semi-detached houses have three floors over a basement and are full stucco, back and front, with stucco dressings around the windows. They back onto the Montpelier Garden. Behind they have closet wings (already shown on the 1863 Ordnance Survey map), rather unusually for houses abutting communal gardens.  Some alterations have been made to the lower part of the rear elevations and a window was inserted in the otherwise bare flank of No. 1 in 1993. But otherwise these houses have largely conserved their original exterior appearance. Both houses have what are almost certainly their original railings on the street, and ornate cast iron plant restrainers on their raised ground floor windows.