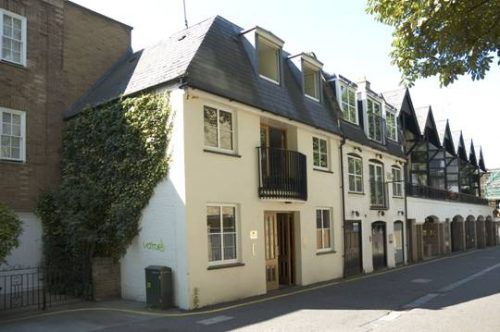 Lansdowne Mews runs between Clarendon Road and Lansdowne Road and is one of the few mews on the estate that is not a cul-de-sac. The mews is numbered from west to east and no longer corresponds exactly with the pre-war numbering. There is no No. 1, and between Nos. 4 and 5 there is now a large residential block called Greens Court.

Lansdowne Mews was probably laid out in the late 1830s or early 1840s, when the houses south of it in Holland Park Avenue were erected and the section of Ladbroke Road to the north was also being developed. At first it was probably a simple alley between the two sets of gardens, and it seems to have been some time before it became built up. In 1863, according to the Ordnance Survey map, only three of the Holland Park Avenue houses had built themselves stables giving onto the mews at the bottom of their garden. Further stables were gradually added along the south side, with accommodation above. By 1935, there were six numbered dwellings (almost certainly all above stables). The north side, however, remained largely unbuilt up.

By 1871 there was one coachman living in the Mews with his family and three unoccupied premises. By 1901 five families were living in the mews, headed by grooms, stablemen or small tradesmen.

Almost nothing now remains of the old mews. The only 19th century buildings are Nos. 5 and 6, although they are virtually unrecognisable as the stables plus accommodation above that they must once have been. Both have acquired an extra floor and had a major reconfiguration of their facades. There is a flying freehold between No. 5 and No. 6, as the party wall exists at first floor only. At ground floor level there was a narrow alleyway for emergency egress in between the two mews houses, now invisible behind a door.

No. 2 is a tiny structure immediately behind 10 Clarendon Road; Nos. 3 and 4 are a pair of undistinguished small modern houses. Then comes Greens Court, a large 1980s residential development with 12 dwellings that runs back to Holland Park Avenue. Its Lansdowne Mews façade presents quite a good piece of modern design. It replaced a garage/motor car business with a big show-room on Holland Park Avenue.

Nos. 7-10 were built in the 1950s on some vacant ground behind the Underground Station. They are three storey houses in the neo-Georgian mode that was fashionable in the great post-war building era. In around 2006, an extra one-bay full-height extension was added to the eastern side of No. 10 (the corner house), with an entrance on Lansdowne Road in the form of a rather incongruous Victorian-style porch surmounted by a bottle balustrade. 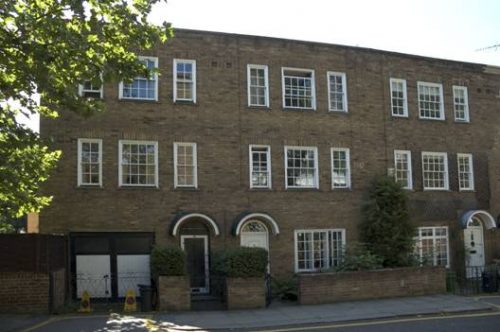 The neo-Georgian Nos. 10, 9 and 8 Lansdowne Mews before No. 10 was extended eastwards

The north side is entirely occupied by the curtilage of Mead House, one of the post-war blocks of flats on Ladbroke Road.