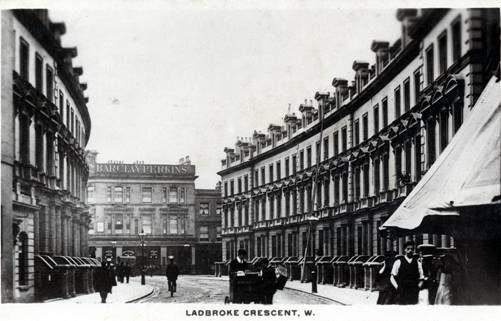 Ladbroke Terrace is one of the most architecturally uniform and best preserved streets on the Ladbroke estate. Its preservation is all the more remarkable as it only recently became part of the conservation area, and is in the ‘rough’ northern part of the estate that suffered dreadfully from poverty, bad landlords and general neglect in the middle part of the 20th century, resulting in dilapidated and damaged houses in most streets. Miraculously, the houses in Ladbroke Crescent have retained almost all their stucco detailing, and – apart from the loss of several houses to bomb damage at the end of the south side – it looks very like it must have done when it was built.

The houses are numbered consecutively. Nos. 1-8 are on the south side (running from east to west), as were Nos. 9-12 before their demolition; and Nos. 13-24 (running from west to east) on the north side. 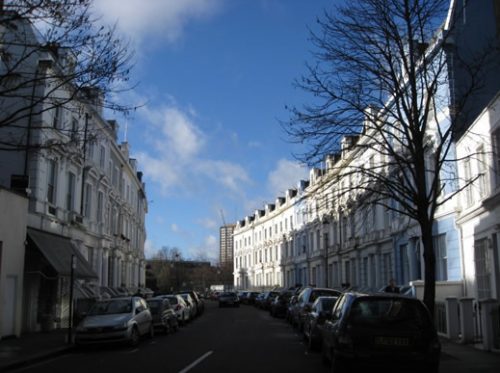 Ladbroke Crescent belongs to the third and final great period of building on the Ladbroke estate and the houses were constructed in the 1860s. Development of this area had suddenly become more attractive with the opening in 1864 of the Hammersmith and City line of the Metropolitan Railway with a station on Ladbroke Grove (the station was originally called ‘Notting Hill’), and the introduction in the early 1860s of cheap workmen’s fares.

By that time the Ladbroke family had disposed of the land, either by selling the freehold or by giving 99-year peppercorn rents. The land on which Ladbroke Crescent lies was in the hands of the speculator and ex-Calcutta merchant Charles Blake, who had already developed successfully several other parts of the Ladbroke estate. In 1864, he granted a lease of the whole crescent to G. and T. Goodwin, builders. The normal pattern was no doubt followed, according to which the builder had to build houses meeting certain standards; he was then given a 99-year lease of the property which he could let, thus recovering his costs, but he had had to pay a ground rent to the landowner (typically £10 in Ladbroke Crescent). In early 1865, the Goodwins began advertising their new houses in the Times:

It is not clear how successful they were in attracting the sort of purchaser they had in mind. Some middle class families with usually one servant moved in. In 1900, for instance, the occupant of No. 4 was advertising for a ‘parlour maid, experienced, trustworthy, middle-aged, in a gentleman’s family. Good references.’ But the census indicates that most of the houses were soon in multi-occupation, or occupied by people letting rooms. In 1866, for instance, ‘furnished apartments, with or without board, for a lady and gentleman or two gentlemen’ were being advertised at No. 6, offering ‘every home comfort, with perfect cleanliness, may be relied on. An extra bedroom if required.’  And a bit later, the occupant of No. 20 was advertising a ‘parlour, with large bedroom upstairs, at 25s per week. Good cooking and attendance.’

It seems that letting was not always easy in an area that was probably only on the edge of gentility, especially as the 20th century began. The following is an article that appeared in the Times of 2 January 1909:

Yesterday afternoon some lads found in a dustbin in the basement of a house in Ladbroke-crescent, Notting-hill, the dead body of a woman. The house is let in flats and the lower flat is unoccupied. The lads informed a postman of the discovery, and a policeman and two doctors were called. When found, the body, which, except for a pair of socks, was naked, was in a cramped position, huddled up, and the right arm, which was hanging limp, appeared to have been broken at the shoulder. The back appeared to be covered with bruises or sores. The woman had black curly hair, which was drawn back from the forehead. Near the dustbin was a quantity of female clothing, including a hat, a cape, skirt and a pair of boots. The dustbin stood under the area steps. It is in the form of a wooden box about 4 ft. long and 3 ft. wide, with a hinged top and a small sliding door at the bottom. When first discovered the body showed some signs of warmth, and it is believed that the woman had only been dead a few hours when the body was found. It was removed to the Kensington Mortuary. The age of the woman is variously given as about 25 and 40. Although the body had not been identified up to 8 o’clock last night, the woman is said to be known to the police, and to belong to Notting-dale. The police state that there were no marks of violence, but that the woman probably died of starvation and privation, the body being very emaciated.

In 1895, 7 Ladbroke Crescent harboured the Committee Rooms (office) of the North Kensington Conservative Association. During the first half of the 20th century, the area went steadily downhill, becoming more slummy and probably reaching its nadir in the 1950s, at the time of the Notting Hill Race Riots, when a 21-year old inhabitant of the Crescent was convicted of carrying offensive weapons, to whit a spanner and file, in Lancaster Road during the riots. Since then, however, the area has been steadily improving.

1935 Ordnance Survey map showing the plan of Ladbroke Crescent before the end of the terrace was demolished. Note that there was a convenient pub at the end of the road.

Ladbroke Crescent is the outermost of the great series of crescents on this side of Ladbroke Grove. Unusually for this late period, the houses are full stucco. They are in the classical mode, with inter alia Tuscan columns on their porches. An unusual feature is the pierced stucco balconies. 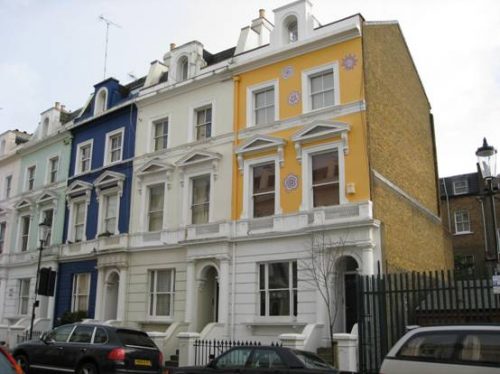 Nos. 23-24 (at the Ladbroke Grove end) are double-fronted and bigger than their neighbours, very grand for this area. No. 24 (and the first two houses on the other side of the road, Nos. 1-2) are also distinguished from their peers by having different pediments above their first floor windows, as did no doubt the corresponding houses at the other end of the terrace, to create a ‘bookending’ effect. But there is no indication that the west end of the terrace had bigger houses, so Nos. 23-24 seem to have been a one-off, probably to compensate for the fact that they are shallower than their neighbours because of the curving of the crescent. What is now No. 25 was part of building on the north-west corner with Ladbroke Grove, now No. 25A but originally 131 Ladbroke Grove.

There are deeds relating to Nos. 10,11, 12, 16 and 18 Ladbroke Crescent in the Kensington and Chelsea Local Studies Centre that include details of the original leases. Both the 99-year leases and the freeholds were bought and sold as investments, and by 1865 the freeholds of these properties (and probably of others in the Crescent) were acquired by the Governors of the Middlesex Hospital, no doubt to form part of an income earning property portfolio. After the houses were bombed in the Second World War, the Hospital sold the bomb damaged sites to the Borough in 1955 for the erection temporary housing. Deeds Nos.  28970-28989.