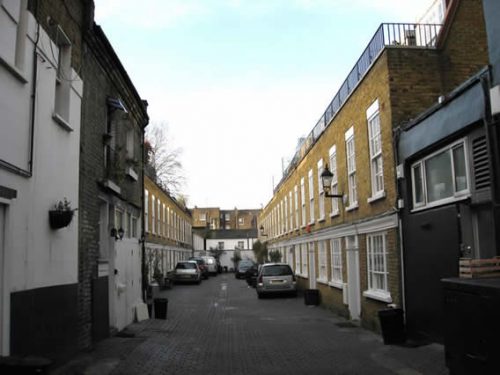 This small mews off Kensington Park Road was originally built in the 1860s (it first appears in the 1871 census) between the back gardens of houses in Blenheim Crescent and Westbourne Park Road. The original buildings were probably typical two-storey mews houses with stables and coach-houses below and accommodation above. The 19th century census returns show that the properties were almost exclusively inhabited by coachmen or grooms, no doubt working for the occupants of the grander houses in neighbouring streets.

When horses and coaches were replaced by cars, the ground floors were mainly turned into garages and workshops. In the Second World War five of the houses at the end of the mews were converted into industrial premises for the manufacture of structural steelwork for the war effort. By the end of the War, it appears that the mews was pretty dilapidated and it was one of several such mews in the area identified for future acquisition by the Council and demolition under the slum clearance scheme.  However, no immediate action was taken by the Council. Various private redevelopment schemes, involving complete reconstruction, were then submitted for planning approval and the present 14 stock-brick houses were finally erected in the 1960s. The mews is cobbled, although probably not with its original cobbles.

It appears that the mews was classified as a private road – i.e. there was public access but the Council had no responsibility for its upkeep (this was not untypical for mews).  In the early 1990s the residents obtained a closure order, extinguishing public access rights and enabling them to install gates at the entrance to the mews. It is one of the very few gated developments in the area. 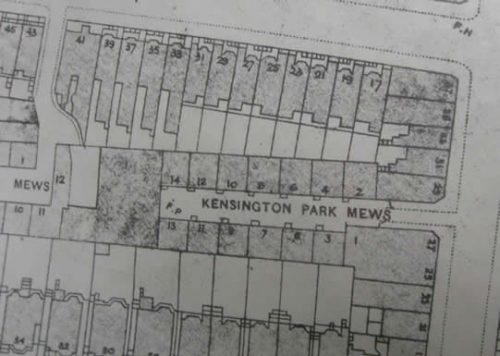 1935 Ordnance Survey map of the mews.

There are no listings or designations.