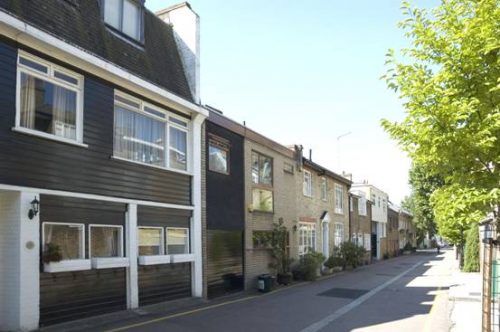 A vista looking west down the mews.  © Thomas Erskine 2006

The entrance to the mews is in Lansdowne Road and it is a cul-de-sac. It was probably named after Boyne House, which stood on the site of Holland Park tube station. The first four houses on Holland Park Avenue to the east of Boyne House were originally called Boyne Terrace, and Boyne Terrace Mews provided accommodation for the horses and carriages belonging to these houses and those in the next terrace along. It still seems to have been used mainly for horses at the time of the 1901 census, as only three dwellings are recorded in the street (numbers 6, 7 and 14), and numbers 6 and 14 were occupied by respectively a cab proprietor and a cabman, who no doubt kept their horses in the mews. No 7 was occupied by a bootmaker.

Since then, all the stables (which were all on the south side) have been rebuilt as mews houses in a variety of styles, including some good modern ones. Number 4 has disappeared. The entrance to No. 1, a cottage called “Casita” (previously 74A Holland Park Avenue), is round the corner in Ladbroke Road.

No. 5 was designed by Cyril Mardall (1909-1994), a Finnish-born architect, and his wife June Park, also an architect and author of books on house design. They designed the house for their own use in the place of two derelict garages. Although the house presents a rather blank façade, it is lit by large windows on the back and its stylish interior is mainly open-plan with an elegant central spiral staircase. They lived in the house from its construction in the 1970s until Cyril Mardall’s death in 1994. There is an online interview with June Park about 5 Boyne Terrace Mews at the British Library sound archives – https://sounds.bl.uk/Oral-history/Architects-Lives/021M-C0467X0063XX-1000V0 .

No. 6 is partly built over an archway through to a courtyard that belongs to Kent House on 62-66 Holland Park Avenue.

The 1960s two-storey end of terrace house at No. 12 was demolished and replaced in 2019 by a stylish modern house designed by the well-known minimalist architect John Pawson, who also designed the block of flats at 18 Lansdowne Crescent, on the corner with Ladbroke Grove.

There is only one dwelling on the north side, the only 19th century house on the mews – No. 21, next to Lansdowne House, and very much in the style of that block, presumably built at the same time. Otherwise the north side consists of garages and the backs of gardens of houses in Ladbroke Road, and Nos. 14-20 have disappeared 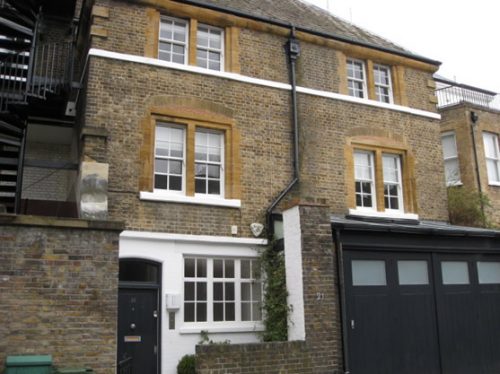 The mews would originally have been cobbled, but is now tarmac, although the central granite draining slabs remain. 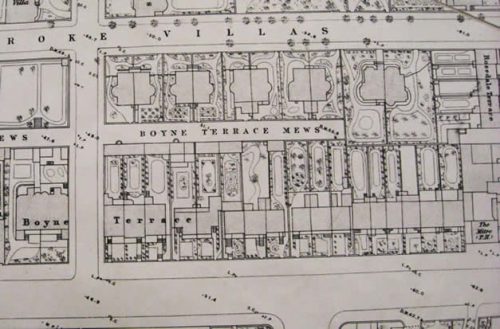