This cobbled mews off Ladbroke Road beside the Ladbroke Arms public house has some of the oldest mews houses in the Ladbroke area, although they have been significantly altered in most cases. The Mews was originally called Weller Mews or Weller Street Mews after the old name for that part of Ladbroke Road (Weller was the surname of the nephew who inherited the Ladbroke Estate from Richard Ladbroke. the original owner). It seems to have changed its name around 1860, when Nos. 42-52 (evens) Ladbroke Road were built and named Wilby Terrace. It has been suggested that the name Wilby comes from Benjamin Wilby, a developer who was involved in several schemes in the nearby area. However, we have so far found no mention of any involvement of such a person in the development of the Ladbroke estate.

The 1863 Ordnance Survey map shows the mews to be already almost fully built up by then, and several residents are recorded in the 1851 census returns (four coachmen, a postmaster and a cow-keeper). It seems likely that the buildings on the west side of the mews at any rate were built in the 1840s (the houses which they served in Ladbroke Grove were built in the 1830s and 1840s). By 1861, Nos. 2-17 were all occupied, again mostly by coachman. All the buildings would have been two-storey structures, with stables and coach-houses below and accommodation for staff above. Some of the coachmen had very large families; the one living at No. 6 in 1861, for instance, had six children and the one at No. 7 had seven children and a niece living with him and his wife. As late as 1901, the residents of the mews were still mainly coachmen. Later many of the stables became garages, and it was not until the second half of the 20th century that parts of the lower floors were taken over for accommodation.

The stables were almost certainly owned or leased by the houses onto which they backed (with the coachmen working for the families), and indeed No. 2 was in 2015 still in the same ownership as the corresponding house on Ladbroke Grove.

It is not clear whether there was ever a No. 1 Wilby Mews as it is not mentioned in any of the 19th century census returns. Where No. 19 now stands, there was in 1863 a courtyard probably belonging to the Ladbroke Arms pub and the number may have been reserved for a future building in that space. When the courtyard was subsequently built upon (probably in the 1870s or 1880s), however, the building appears to have been given the number 19, a number that first appears in the 1891 census.

No. 2 seems to have originally encompassed what is now No. 19 (and indeed both back onto the garden of 20 Ladbroke Grove). They appear to have been split into two by 1891, the date when No. 18 first appears in the records (the highest number in the early records was No. 17). This would explain the somewhat awkward numbering on this side. No. 2 retains its original outside staircase to the upper floor, a rare relic on the Ladbroke estate, and its former stable door is still relatively unaltered. It was originally bare brick. 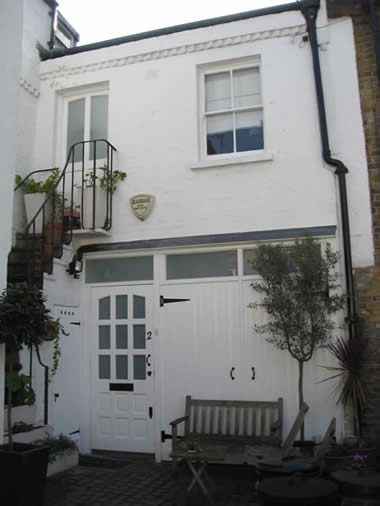 Nos. 3, 4, 5, 6 and 7 form a single symmetrical block, the central house being taller and wider, with a triangular gable rising well above the other houses. This is a particularly handsome piece of mews architecture. Some time between 1861 and 1871, Stephen Cole set up a livery stables at Nos. 4 and 5 (he also described himself as a “jobmaster and flymaster” – a fly was a light 2-wheeled vehicle). The Coles continued to run their business there until about 1913, so the mews must have been a busy place with constant to-ing and fro-ing of horses and carriages. In 1913, a sign of the times, No. 18 had become a “motor garage”.

The ground floor of No. 5 received planning permission for transformation into a single residential unit as early as 1949, and No. 6 was transformed into a single family dwelling in 1951. Although the lower parts of these houses in particular were significantly altered as their usage changed, with only No. 7 retaining its old stable door (in fact there may originally have been two doors as old planning documents refer to a double garage), the overall shape of this little terrace remains clear. 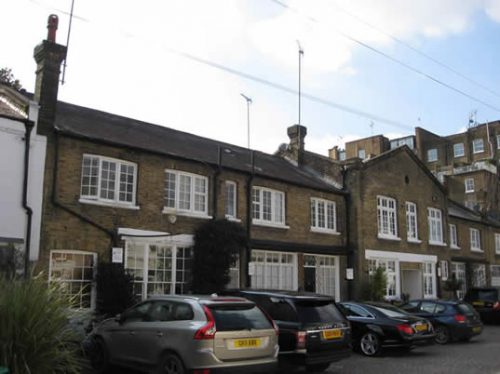 No. 8 (which probably served 6 Ladbroke Square) has been rebuilt in a not very sympathetic form.

Nos. 9 and 10, at the northern end of the mews, probably served the houses behind them in Ladbroke Square. They have been very substantially altered over the years, in particular gaining an extra floor. 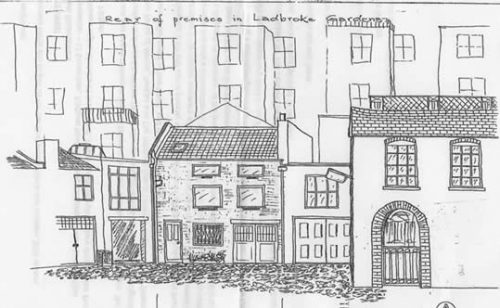 1992 architect’s drawing of the houses at the end of the mews, before an extra floor was built on No. 10. 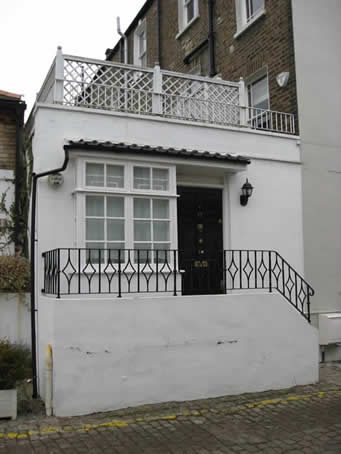