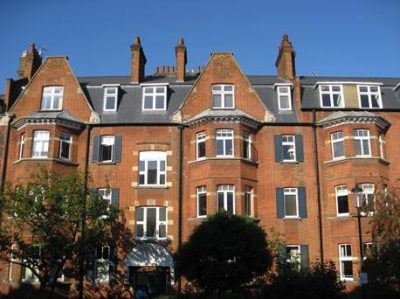 When the Ladbroke estate was developed between 1820 and 1870, all the houses were intended as single family homes. At that time, except for serviced “chambers” for rich bachelors and short-term stays in London, flats were regarded as for the poor. As Richard Phene Spiers, a well-known architect of the time, noted in an address to the Royal Institute of Architects in December 1871, “there seems to be a decided distaste on the part of the English public to living in flats.” In Paris, on the other hand, flats were very popular, a fact that he attributed to the French “being accustomed to be satisfied with a much smaller quantity of everything than we are. They use very little water, and do not always see the necessity for a bath at home; it is the same with regard to food and everything else. The rooms are only just as large as is necessary. They have not large families or it would be difficult to understand how they could manage with such small accommodation.”

Flats seem to have been mistrusted on a number of counts. No doubt because they were associated with the poor, flats were seen as unsanitary and liable to spread disease.  It would also be unpleasant for the upper classes to live in enforced close proximity with their servants and to have to run the risk of meeting artisans and tradesmen on the stairs. Moreover, having the bedrooms on the same floor as the living rooms could encourage immorality – a sentiment probably strengthened by the fact that the French, known for their promiscuous habits, lived in flats.

All this was about to change. By the mid-1870s, there was beginning to be a demand in London for dwellings for small middle class families which could be managed with fewer servants and which were relatively near the centre of town. Large family houses were proving difficult to let or sell, and the day of the mansion flat was at hand. In the latter part of the 1870s, the architect Richard Norman Shaw designed a massive block of flats to stand next to the Albert Hall, the present Albert Hall Mansions. Shaw also departed from the then current fashion for stucco by building his new block in red-brick. The project was a great success. For the next three decades, red-brick mansion blocks became all the rage.

The Ladbroke estate was fully built-up by the time the mansion block boom began. But nevertheless two red-brick mansion blocks were constructed around 1900, in both cases replacing earlier family villas. The first is Crescent Mansions at the west end of Elgin Crescent (see photograph above). Originally, as the 1863 Ordnance Survey map shows, there were two villas standing in their own large grounds, Clifton Lodge and Arundel Villa, at this end of Elgin Crescent. But in the early 1900s Clifton Villa had been demolished (possibly after fire damage) and Crescent Mansions erected in its place.

Around the same time, the middle house of one of the very grand trios of stucco villas in Kensington Park Gardens was destroyed by fire. Again it was decided not to rebuild it to match its neighbours but to erect a seven-storey mansion block with one flat per floor. It is red-brick and terracotta, considerably more ornate than Crescent Mansions, to such an extent that it has been nick-named Little Harrods by the locals. It looks totally out of place, but it is such an extraordinary building that it has its own charm. 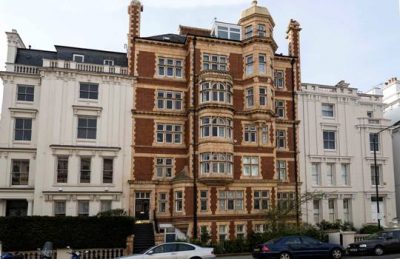 The Victorian and Edwardian mansion-building boom came to and end with the outbreak of the First World War. The next great era of mansion construction, at least on the Ladbroke estate, was in the 1930s. This was a highly experimental decade architecturally, and the mansion blocks built during that period were in a bewildering variety of styles. Red-brick was still favoured by some, especially the architects of the huge blocks of flats in Kensington Park Road. As in the case of Crescent Mansions, these replaced a number of mid-19th century detached villas in their own grounds. We do not know why the latter were demolished, but no doubt they were in a bad state and developers saw an opportunity to make a good profit. These mansion blocks are distinctly art deco in style, as is Bowden Court in Ladbroke Road, built around the same time as a hostel for young shop-workers. 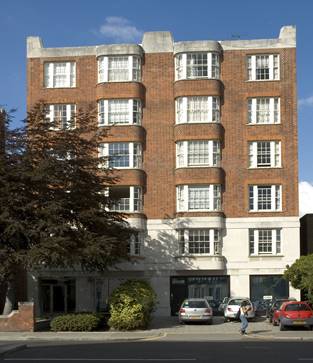 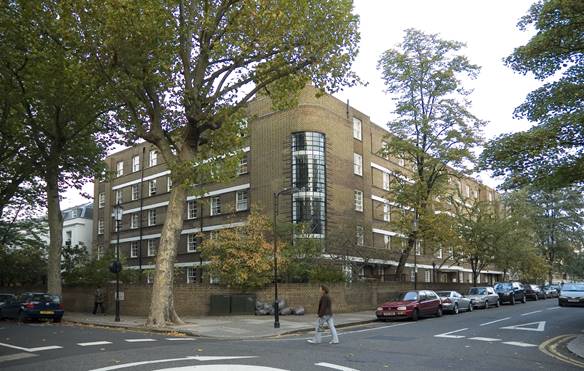 Bowden Court on the corner of Ladbroke Road and Ladbroke Terrace. ©Thomas Erskine 2006

There is another plainer and more utilitarian red-brick block, Ladbroke Grove House, at 77 Ladbroke Grove, designed by an architect called Austin Blomfield in 1935. Only a year or two before, he had designed Lansdowne Court, unique among our mansion blocks in being stucco. 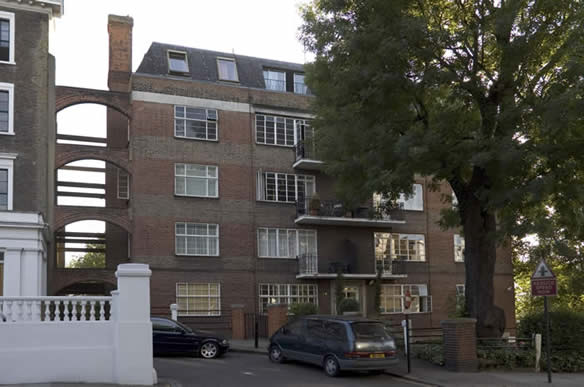 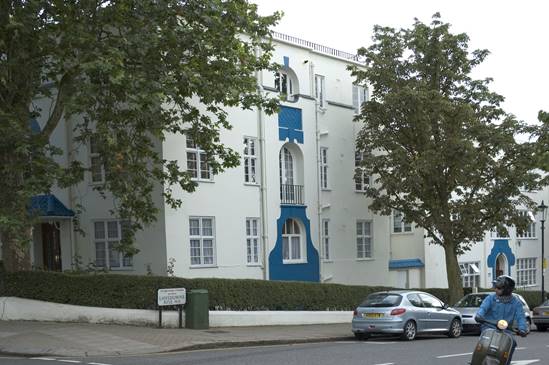 Lansdowne Court in 2006. It has since acquired an extra floor. ©Thomas Erskine

Occupying an enviable position at the top of the hill opposite St John’s church, The Lodge, again built in the mid-to-late 1930s on the site of two mid-19th century villas, goes back to a more Georgian or classical style. It is similar to Duke’s Lodge in Holland Park, which the Candy brothers have acquired and propose to demolish to replace by flats disguised as pastiche classical villas. When The Lodge was built, there was considerable opposition from the neighbours, who saw it as quite out-of-keeping with the rest of Kensington Park Gardens. This is of course true, but the building is well-proportioned and has a certain satisfying solidity. It would be a great pity if it met the fate threatened for Duke’s Lodge and was replaced by something even more unsuitable. 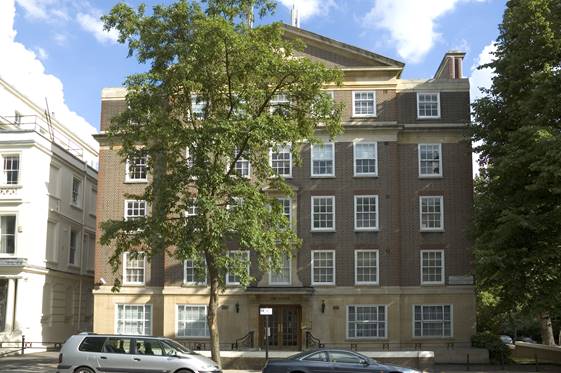 The most architecturally interesting of the 1930s mansion blocks is that at 65 Ladbroke Grove, an example of what was for its period extreme modernism and an extraordinary contrast to the contemporaneous block at The Lodge opposite. It was designed by the great British modernist architect Maxwell Fry, with a helping hand, is said, from the young Walter Gropius. Although some have held it responsible for giving birth to a form of post-war Council flat that has come in for quite a lot of criticism, it was greatly admired at the time. A 1938 article in the journal Building, said that: “Its light construction and elegant detail [provide] a diametric contrast to more heavily designed neighbours. In effect, however, and owing to the excellent proportions of the newcomer, this contrast is not so much startling as extremely refreshing.” Because of its importance in the development of modern architecture, it has been given a Grade II listing. 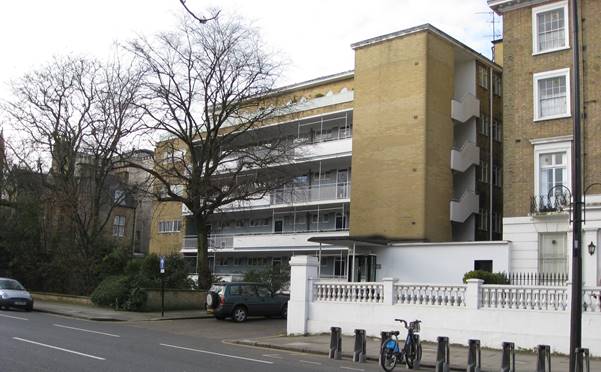 The many gaps left by World War II bombs and the degradation of buildings during the years of Rachmanism provided fresh opportunities to build mansion blocks where family homes had previously stood. There are for instance dull but innocuous brick blocks in Elgin Crescent (Galsworthy House); St Mark’s Place (Hudson House); Lansdowne Walk (Bartok House) and 121-123 Lansdowne Road;  and a rather more interesting one at 36-40 Lansdowne Road. 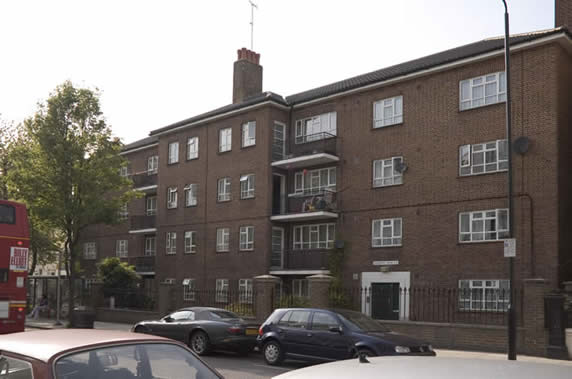 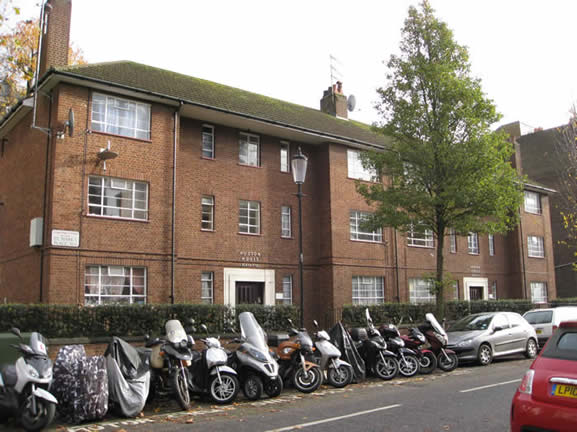 Hudson House in St Mark’s Place. It replaced the Ladbroke Grove Baptist Chapel, which was demolished after the Second World War. 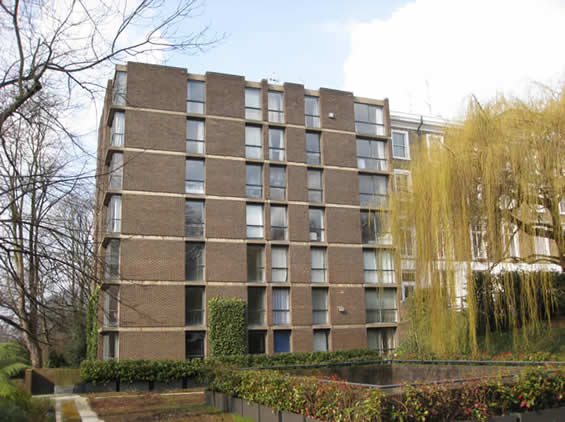 Bartok House on the corner of Lansdowne Walk and Ladbroke Grove. There were two perfectly good if dilapidated mid-19th century houses here, but in 1968 a developer obtained planning permission to demolish them and build this block. 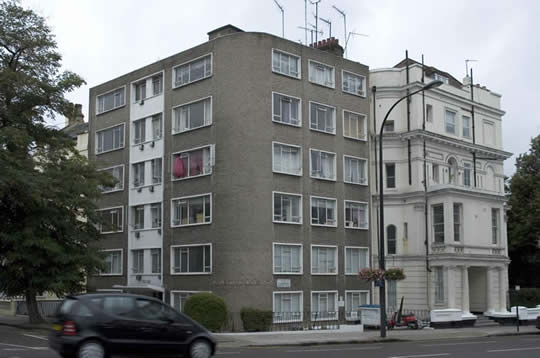 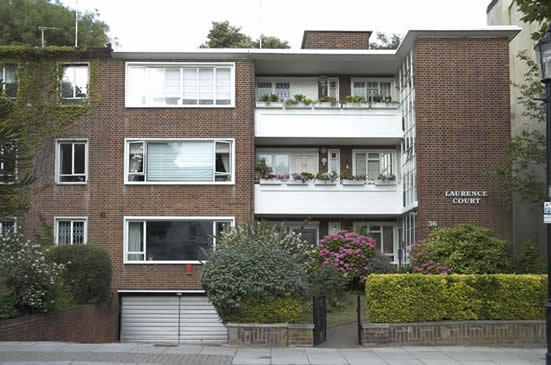 There is a more unfortunate stucco building at 105-111 Lansdowne Road (Liddiard House) which seems to be trying to be both modern and like the stucco houses in the terrace and failing in both. It backs onto a communal garden, and its undecorated brick rear elevation is an eyesore among the elegant stucco rears of the neighbouring houses. 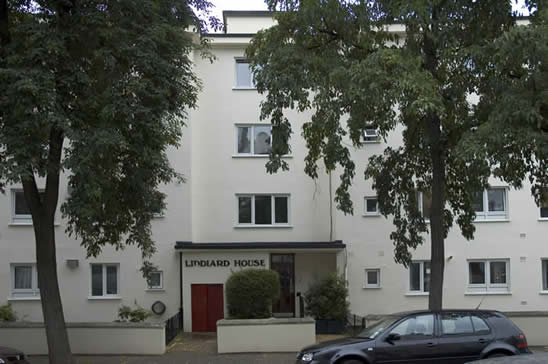 The 1960s Arundel Court on the corner of Ladbroke Grove and Arundel Gardens, on the other hand, is frankly modern and the better for it, although the demolition of the dilapidated end-of-terrace houses to make way for it would not be allowed nowadays. 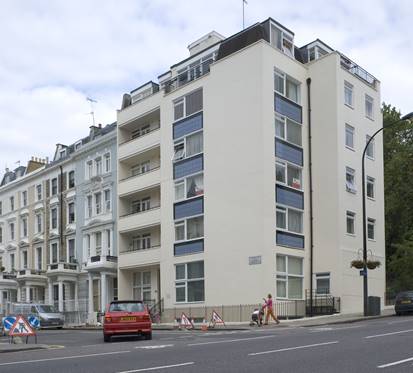 Arundel Court in 2006; it has now been painted gunmetal grey. ©Thomas Erskine