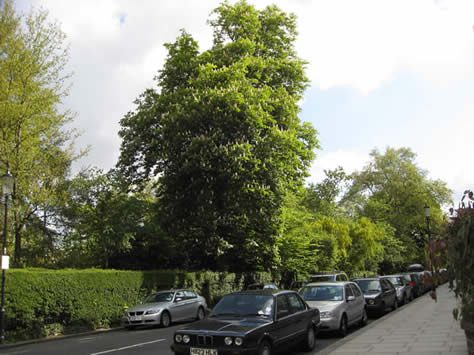 The huge Ladbroke Square communal garden is unusual on the Ladbroke estate in being part communal garden accessed from the backs of the houses lining it (on its north side) and part traditional London Square with roads between the houses and the square. It is bordered by Ladbroke Grove on its west side, Kensington Park Road on its east side, and the road called Ladbroke Square on its south side – so the latter is something of a misnomer, being a single long road. All the houses are numbered consecutively.

Felix Ladbroke, the owner of the Ladbroke estate, signed an agreement in 1840 with a developer, Jacob Connop, a bill broker in the City of London, to develop inter alia the road now called Ladbroke Square. Under this agreement, Connop let building leases of the individual plots to various builders. Then, when the houses were built or nearly built, Ladbroke granted 99-year leases of the houses to Connop or some other person at his direction, usually the builder, allowing the developer and/or the builder or financier to recover their capital outlay by subletting or selling the leaseholds..

It seems to have taken Connop some time to find people willing to take up building leases. The first plots to be let were Nos. 23-27 in August 1840, and then Nos. 28-31 in October that year. There was then a minor crisis when 220 yards of sewer that Connop had laid in the future Ladbroke Square collapsed. The whole project continued to be punctuated by various financial crises affecting the developers, and Connop himself was bankrupted in 1845. It was not until 1860 that all the houses in the road were finally completed.

All the houses are tall – mostly five-storey, including basement – and half stucco. Several houses were badly damaged in the Second World War or by fire and had to be completely or almost completely rebuilt. Nos. 1-3 are the only ones to have had dormer floors added. 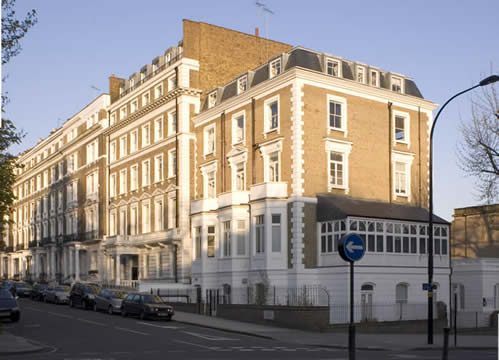 Ladbroke Square seen from Ladbroke Grove. No. 1 is in the foreground.  © Thomas Erskine 2006

Although these houses are all superficially similar, on closer inspection they can be seen to be divided into blocks with slightly different features, reflecting the fact that building leases of individual plots were given at different times to different builders.

No. 1 Ladbroke Square, on the corner of Ladbroke Grove, was built by W.H. Rowlings of Theobald’s Road in 1851. It is a bit of a one-off, lower than other houses in the road and with three two-storey bays on its Ladbroke Square side. The entrance appears to have originally have been next to No. 2, but was then moved to the southern elevation and a porch added (this is shown on the 1893 and 1935 OS maps), so that the entrance to the house was through the spacious back garden, accessed from Ladbroke Grove. The entrance has now reverted to it original position. The raised conservatory on the Ladbroke Grove (western) side is a recent rebuilding of a conservatory that dated to Victorian times (it is shown on the 1863 map).According to Florence Gladstone’s book Notting Hill in Bygone Days, in the 1920s there was a “trough of broken masonry” in the garden of St John’s vicarage that was believed to be a Roman sarcophagus unearthed on the site of No. 1 Ladbroke Square.

In the late 1980s, the Council – which owned the freehold and had been using the building as a day nursery – decided to sell the freehold, retaining a leasehold of the two lower floors for the nursery. It also granted planning permission for an extra mansard floor so that the purchaser had three floors above the nursery for development as flats. At the same time, the present one storey building to the south was authorised, as a replacement for an old mortuary building that stood there at the time (we have no information on why there was a mortuary there). This allowed the nursery to expand sideways. The new southern extension was renumbered 34 Ladbroke Grove. The conservatory (which had been mounted on stilts) was rebuilt as a two-storey extension at the same time.

Nos. 2-3 (Ladbroke Square House) were originally two separate houses, each with its own porch. There seems to be no record of when these two houses were built, but probably in the mid-1850s. They were converted into a boarding house in the 1900s and then a residential hotel for the elderly, the Ponsonby Court Hotel. In 1968, a fire broke out, as a result of a faulty electric blanket. It killed two people and caused serious damage. The damaged building was then demolished and redeveloped as flats in the early 1970s. This involved inter alia  the rebuilding of the front wall as a near facsimile of the original, but with the suppression of one of the porches and the addition of a dormer floor, and with a completely redesigned interior and rear.

It is not entirely clear what No. 19 originally looked like. But it was probably the pair of No. 18, as Nos. 4-19 seem to have constituted a symmetrical terrace with two-house bookends (nos. 4-5 and Nos. 18-19) at either end and a four-house central block (Nos. 10-13), all standing slightly proud of the intervening houses and with different fenestration, notably three-light windows at first floor level, unlike the two single light windows on the intervening houses. The central block is also distinguished by having a decorative frieze on its upper string course.

Nos. 20-22 were erected about 10 years earlier and are very different – they were built by a builder called John Brown of St Marylebone (to whom Felix Ladbroke granted leases of the houses in 1844). They are a storey lower and have bottle balustrades rather than railings along their first floor balconies and above their porches. Like many of the houses in the next block, they have unusual double front doors; and they also have double pillared porches. No. 22, the corner house, has its entrance round the corner in Ladbroke Terrace. From the 1930s until after the Second World War it housed a convent of the Missionary Sisters of Our Lady of Africa. It subsequently became a Czechoslovak cultural centre called Velehrad House (1964-2013). 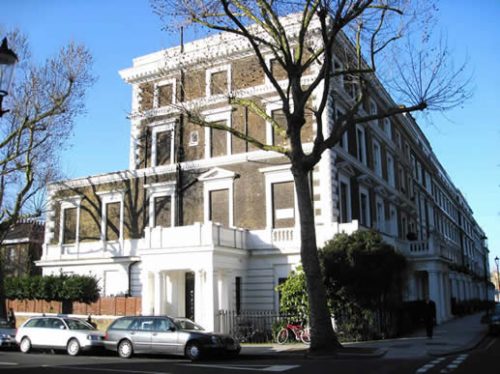 The side of No. 22 Ladbroke Square in Ladbroke Terrace. Photo 2008

The building leases for Nos. 23-27 were given by Connop to a builder called William Gribble of St Marylebone in 1842. However, when the houses were completed in the following year, Ladbroke gave 99-year leases to Connop’s solicitor, William Parkin, no doubt because of some complicated financial arrangement between the parties. The houses are elegantly plain, with four storeys plus basement, no string courses and porches with Tuscan pillars. The porches are particularly wide and the houses have unusual double front doors (except for No. 27, the entrance to which has been narrowed and a standard panelled single door installed). All except No. 26 have stucco bottle balustrades at the street boundary, unlike most of the rest of the houses on this street which have railings. The houses have neat multi-storey closet wings to the rear, not much altered over the years. No. 23 has an interesting array of blind windows on its side elevation in Ladbroke Terrace. 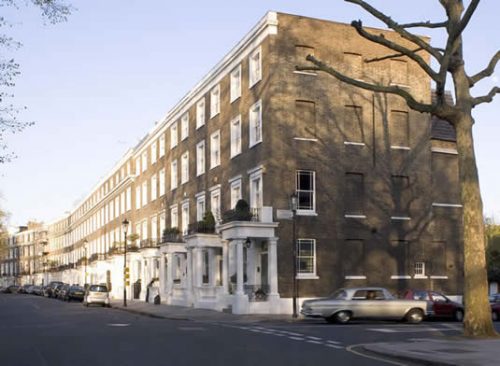 Ladbroke Square east from Ladbroke Terrace. No. 23 in the foreground.  © Thomas Erskine 2006

The long leaseholds of Nos. 24 and 25 were advertised for sale, either as an investment or for occupation, in The Times of 9 December 1843. They were described as “recently erected in the most substantial manner, and finished in a superior style, with handsome portico entrances, and fitted up with every requisite convenience for the accommodation of families of the first respectability. Most desirably situate … commanding beautiful and extensive views in a highly improving neighbourhood.” The ground rent was £20 per annum and the auctioneers reckoned that the rental value was £220 per annum.

Nos. 28-47 date from between 1842 and 1846. They were probably designed by Conop’s architect John Stevens, who was also one of the two architects responsible for St John’s church. He seems also to have had a financial interest in some of the houses.

The houses are uniform in design, with five storeys plus basement; enclosed square-pillared porches; a heavy string course between the upper two floors; and deep closet wings. In fact, however, they form a number of different ranges, sometimes at slight angles to each other to accommodate the curve in the street, each range erected by a different builder. 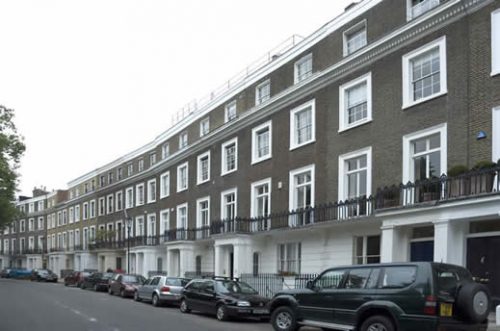 Nos. 31-37 were leased on their completion to Connop’s solicitor William Parkin in 1843. John Stevens, the architect, was a party to the mortgage on these properties. In 1846 he too was bankrupted. Only one of the houses had been let (No. 36) and the leaseholds of the others were put up for auction. The prospectus described them as “built in the most substantial manner, arranged with every regard to comfort, and decorated with much taste. They contain numerous principal and secondary bed chambers, drawing rooms, dining room, library, and domestic convenience, with small gardens at the rear. … The improving character of this highly selective situation is universally admitted” (report in The Times, 17.6.1846). The rental value was estimated at £100 a year. The height was thought to be healthy; and the views were also one of the selling points. An 1850 advertisement for some of these same properties refers to “the cheerful and extensive views over the Highgate and Hampstead hills and the surrounding country form a pleasing feature in the property”.

There is an early survey of the condition of No. 33, commissioned by a prospective tenant, in Kensington Public Library (deed No. 675). This house was  the home of the Labour and Social Cemocrat poltician Roy Jenknins (Baron Jenkins of Hillhead ) (1920-2003) and his wife Dame Jennifer Jenkins from 1954 to 1977, when they moved to Kensington Park Gardens. They paid £5,250 for the house in Ladbroke Square at a time when it was still very run down..

Nos. 28-30 and 31-37 are pretty well identical and share with them particularly ornate iron work at first floor balcony level, and double front doors. Many retain their old bell pushes and boot-jacks. Nos. 36 and 37, however, are slightly wider and have three rather than two bays. 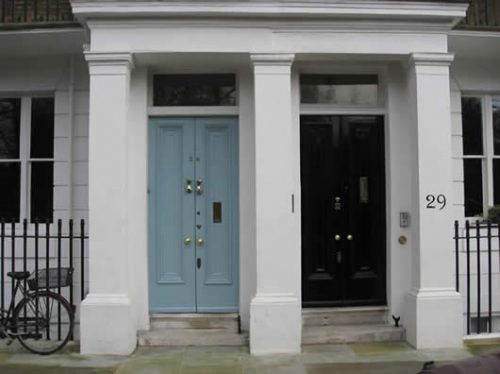 The double front doors on Nos. 29 and 30. Note also that No. 29 has an original round bell-push and bootjack (bottom right of the porch).

No. 38 appears to have been erected by a builder called Henry Monson of St Marylebone, as James Weller Ladbroke (Felix’s heir) granted him a lease of the property in 1846. J.W. Ladbroke granted leases of Nos. 39-47 in the same year to J. T. Crossthwaite of Addiscombe, gentleman, who was probably providing funding. Monson was probably also the builder initially responsible for these houses, but he seems to have come to grief, as the Survey of London notes that all except Nos. 41 and 42 were finished in 1850 by a Mr. Wilkinson under superintendence of John Brown of St Marylebone (who had built Nos. 20-22). Nos. 41-47 retain distinctive matching ironwork at first floor level. They have single panelled doors, imitating double ones. No. 47 has its entrance in Kensington Park Road. A strange probably 19th century double-storey extension with a gable on the south side has been added to the side.

A bomb on 12 September 1940 partially demolished No. 38 and completely destroyed Nos. 39 and 40, trapping five people. After the war the site was cleared and in the 1950s four new houses were squeezed into the gap (Nos. 38, 39, 40 and 40A). Although they follow superficially the pattern of others on the street, they are inevitably narrower than their neighbours and lack a lot of the detailing. When first built, moreover, they were given only three floors above lower ground floor level. Three of the houses were later given extra floors so that they now match their neighbours in height; but No. 40 remains one storey lower.