Horbury Crescent is a short and handsome half-moon shaped street between Ladbroke Road and Kensington Park Road. It has continuous terraces on both sides built in the second half of the 1850s.

In 1848 the site (which was then agricultural land) was leased by Felix Ladbroke (the heir of James Weller Ladbroke who had begun the development of the Ladbroke estate) to William Chadwick in 1848. Chadwick, although he described himself variously as an architect and a builder, was in fact what we would now call a developer, who also developed part of Ladbroke Road and several other nearby streets.  According to the Survey of London, the building of Horbury Crescent was in fact begun in 1855 by his heir W.W. Chadwick, and by 1857 sixteen houses were in the course of erection.

Kensington Temple was originally a Congregational chapel called Horbury Chapel after Horbury in Yorkshire, the home town of its deacon in the 1850s, and this name was also given to Horbury Crescent and Horbury Mews.

Originally, the houses were numbered consecutively, starting from the Ladbroke Road end and running along the western side and then back along the eastern side (so the present 13 was No. 1), but in 1863 it was decided to change the numbering to the present arrangement. 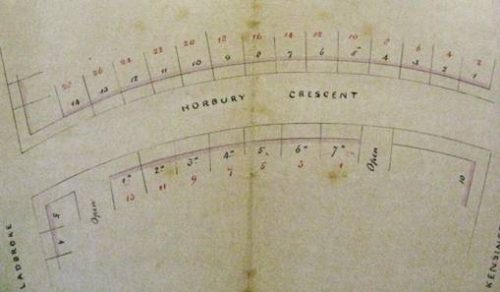 1863 document showing the old numbers in black and the new ones in red. Courtesy of the RBKC Local Studies Centre.

As the Survey of London points out, most of Chadwick’s work on the Ladbroke estate consists of well-proportioned and regular terrace houses simply dressed with stucco, and Horbury Crescent is no exception. 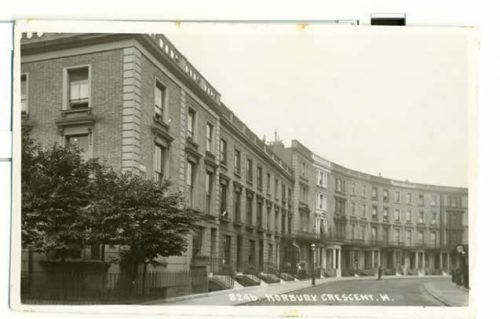 Apart from the end-of-terrace No. 1, which is a slightly larger full-stucco building with no ironwork at first floor level, the houses on the eastern side (Nos.1-13 odds) form a uniform terrace of London stock brick houses with three storeys plus basement. There is coursed stucco at ground floor level and flat stucco below; and decorative stucco mouldings around the windows and above the doors. The window-sills at first floor level have good ironwork balconettes.  Unfortunately, the last two houses have had their brickwork rendered and painted; and the plain side wall on the end house (No. 13) has also been painted over. All houses have good, probably original, iron railings to the street boundaries.

There are typical gaps between the buildings at either end of the terrace where it meets the terraces at (near) right angles in Ladbroke Road and Kensington Park Road. 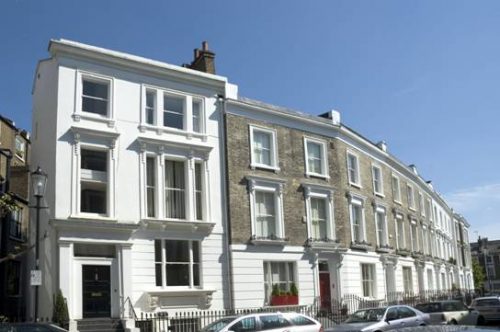 1-13 Horbury Crescent. Note the gap on the left separating the range from the back of the terrace in  in in Ladbroke  Road (photo © Thomas Erskine 2006)

This terrace is less uniform. As on the other side, all the houses are of London stock brick with coursed half stucco at ground floor level and flat stucco below, with decorative stucco mouldings, interesting ironwork at first floor level and iron railings to the street boundary. But there are two distinct ranges. Nos. 2-18 evens form a “bookended” terrace of houses with four storeys, basement and pillared porches, with moulded window frames and ledges. At each end of the range, there are houses (No. 2, a large double-fronted corner house at the Kensington Park Road end, and Nos. 14, 16 and 18 at the other end) with big three-light windows on their upper floors, whereas the intervening houses have two bays of much simpler windows. Nos. 16 and 18 still have balustrades on their roofs and it is clear from the old postcard above that all the houses on this side once had such balustrades. One house in this range (No. 16) has had its brickwork painted black. There is good ironwork above the porches.

Nos. 20-28 evens are smaller, and have no porches or canopies (which is unusual for houses built after 1850, but it is possible that earlier designs by Chadwick senior were being followed). They generally match those on the other side of the street. With the exception of No.20 (which has distinctive ironwork on all three floors), they also have the same ironwork at first floor level as Nos. 1-13. No. 28 abuts No. 12 Ladbroke Road.

All have good, probably original iron railings at their street boundary. 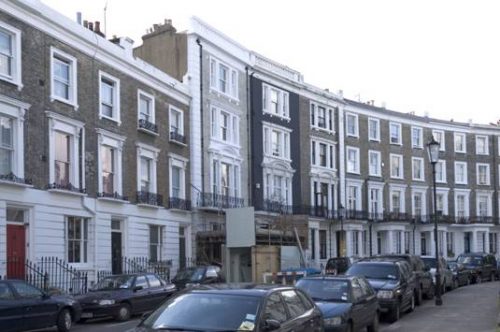 A number of old coal hole covers survive and a new one has been installed by the Notting Hill Improvements Group and the Royal Literary Society with a text contributed by the local writer Sebastian Faulks.