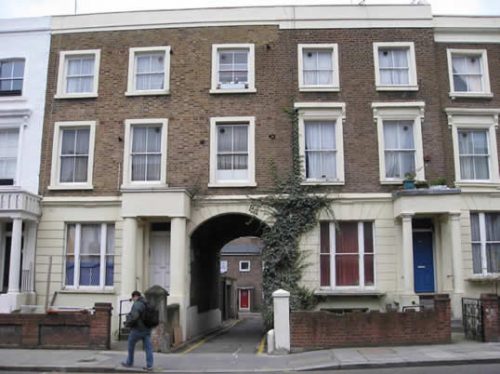 This small L-shaped mews runs from Ladbroke Grove along the back of the gardens of the north side of Westbourne Park Road before turning sharp right to emerge between Nos. 316 and 318 Westbourne Park Road. Unusually for the Ladbroke area, both entrances to the mews are through archways under buildings.

It was built in the 1860s (it does not appear on the 1863 Ordnance Survey map, but is already inhabited by the time of the 1871 census). Both sides of the mews were lined with small two-storey buildings, described in a 1960 Ministry of Housing report (quoted in old RBKC planning papers) as stables with accommodation above. There were no fewer than 28 units. The 19th century inhabitants were mainly connected with horses – cab drivers, horse-keepers and grooms – but with a good sprinkling of labourers and minor tradesmen: a chimney sweep, a baker, a butcher’s assistant, a house painter etc. Whole families were packed into what must have been extremely cramped accommodation, in some cases two families per dwelling. In 1901 the census recorded no fewer than 143 people living in the mews, chiefly families with children. This makes an average of five people in each dwelling.

By the end of the Second World War the mews was in an extremely dilapidated state. As the 1960 Ministry of Housing report said, the houses were also considered unacceptable on the grounds of “their bad arrangement and the narrowness of the street. There was a lack of air and light and the premises were virtually of a back-to-back type.” A slum clearance order was made in 1950, all the houses were demolished and the Council made a compulsory purchase of the whole site. There followed some 15 years of dithering, during which the site was used for motor repair businesses. The Council’s first idea was to give the mews over to stables for costermongers (street sellers), presumably with the Portobello Road traders in mind. But this was not pursued. Finally, in the mid-1960s, planning permission was granted for houses to be built along one side of the mews to provide “flatlets” suitable as accommodation for the elderly.  Now, all that is left of the original mews are the two arched entrances.The road itself is still privately owned by the Council and many of the dwellings are still social housing. 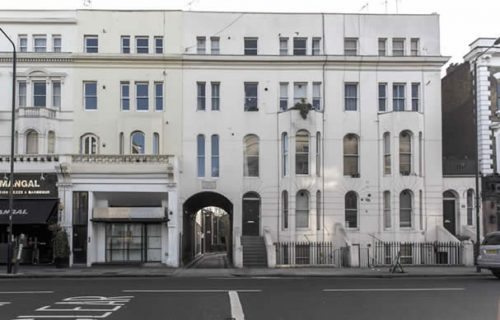 The entrance to Elgin Mews from Ladbroke Grove. PhotoBecket 2015