Bulmer Mews and the Prince Albert

The entrance to this tiny mews is to the right of the Prince Albert pub in Pembridge Road. It runs down the backs of numbers 1-7 (odds) Ladbroke Road and presumably served as stabling for these and for the pub. It was probably first built up in the late 1840s or 1850s, and its original name may have been Victoria Mews – although it is already shown as a nameless alley on the 1862-5 Ordnance Survey map. By the time of the 1881 census, it had been named or renamed Prince Albert Mews or Albert Mews, a name it retained until into the 1930s, presumably because of its proximity to the Prince Albert pub. It seems then to have been renamed Bulmer Mews by association with nearby Bulmer Place, a road which ran roughly where the service road now is for the shops on the north-west side of Notting Hill Gate (and which disappeared in the great 1950s redevelopment of Notting Hill Gate).

Bulmer Place originally had two entrances, both through archways. One was in Pembridge Road down the south side of the Prince Albert (where the lorries now turn in to service the shops on the north-west side of Notting Hill Gate). A branch of the mews then turned south to emerge into Notting Hill Gate roughly where the current tower block is.

The original buildings consisted of stables with living premises above. The 19th century census returns list seven or eight dwellings in the mews, mostly occupied by people associated with horses in one way or another – there were several grooms or coachmen; an omnibus horsekeeper; a dealer in horses; and in 1901 a fruiterer’s carman and a draper’s carman.

As the motor car replaced horse-drawn transport, the mews probably lost some of its residents, and became a fairly scruffy place.  By the 1930s it appears to have been considered ripe for redevelopment, as in 1936 a planning application was made to develop both the Mews and 1-7 Ladbroke Road as a theatre. The application was granted, but the scheme did not go ahead. During the Second World War, an overground air raid shelter was erected in the mews, and after the war Kensington Public Library used this structure for a local branch, the Bulmer Mews Library. The library remained there until 1955, when the old air raid shelter was demolished.

Any buildings that remained were by this time probably in a pretty parlous condition. Already in 1946, when the brewery that owned the Prince Albert applied to Kensington Borough Council for planning permission to use part of the mews for offices and warehouses, a Council planning officer commented that it would involve pulling down “three or four very dilapidated stables with flats over, which are at present unfit for habitation”. Ownership of the mews seems to have been shared by then between the brewery (which owned the entrance to the Mews) and the playwright Ashley Duke of the Mercury Theatre (he was the husband of Dame Marie Rambert, whose eponymous ballet company was based at the Mercury). Duke had another go in 1975 at obtaining planning permission for a theatre, this time as part of a six-story office block. But his application was refused and for much of the next nine years a garden centre occupied the Mews.

The Mercury Theatre finally sold the mews “to alleviate financial pressures”, and in 1984 the new owner finally obtained permission to build the current mews houses, of which the two end ones are illustrated below.They all have integral garages. 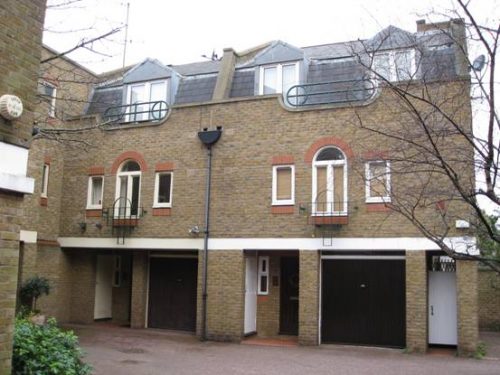 Some quite stringent planning conditions were attached to the planning consent, incuding the following. Because of concerns about parking, it was specified that the garage accommodation should not be adapted for living, commercial or other purposes, and should be available at all times for car-parking. Any further additions, extensions or enlargements would require planning permission. And the premises were not to be used for holiday lets.

The Prince Albert public house in Pembridge Road is included in the Ladbroke Conservation Area. It was built a year or so after Queen Victoria’s marriage to Prince Albert in 1840. James Weller Ladbroke, the then owner of the Ladbroke Estate, had signed an agreement in 1840 with a builder, William Chadwick, for the development of the area around the intersection of Ladbroke Road and Kensington Park Road, and Chadwick began by building a public house – a common practice among developers, so as to profit from their workmen spending their wages at the pub.

It appears to have been a flourishing concern from the beginning. In the 19th c entury it was a hotel as well as a public house and the census returns show a number of barmaids and other servants resident on the premises. When the Chartist Leader Feargus O’Connor died in poverty in Notting Hill in 1855, the Kensington Gazette reported that “the friends and admirers of  the deceased in his early political movements, mustered in strong force at the Prince Albert, Notting Hill, and followed the corpse two abreast to the cemetery [at Kensal Green] where an oration was delivered over the deceased’s body by a working man”.

In the 1850s to 1870s there was a brewery conveniently situated next door to the pub, possibly in the same ownership. 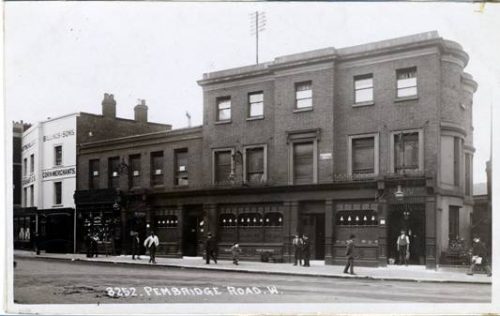 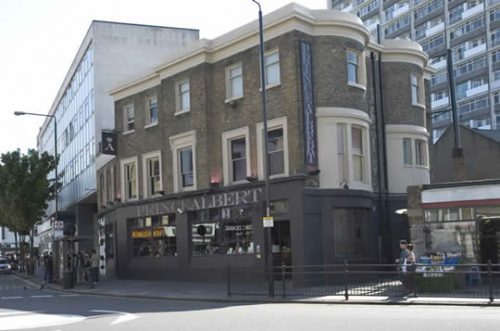 Notting Hill in Bygone Days, by Florence Gladstone and Ashley Barker, originally published in 1924 by T. Fisher Unwin and republished in 1969 by Anne Bingley.

All the buildings in the mews are subject to an Article 4 Direction removing permitted development rights in respect of alterations to front doors or windows.

The houses are in two neat modern terraces, and their neatness derives partly from their uniformity. It would be detrimental to the look of the mews to alow changes to their exterior façades or roofs.