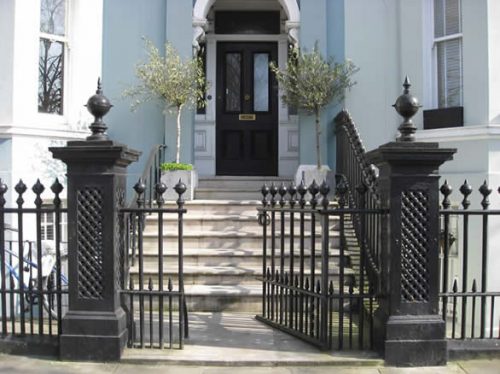 The Ladbroke area has a good number of interesting domestic railings, which form an integral and important part of its architecture and streetscape.

Metal railings began to be used on domestic buildings in London in the 17th century, during the period of reconstruction after the Great Fire of 1666. The earliest railings were wrought iron, which continued to be used until the 19th century, when it was largely supplanted by cast iron. The late 18th century had seen the development of industrial techniques for making cast iron, which allows for much more versatile shapes than wrought iron. The 18th century Adams brothers, who were largely responsible for popularising the neo-classical style architecture characteristic of the Ladbroke estate, quickly realised the ease with which cast iron could be made into classical shapes and almost all the railings and gates in the Ladbroke area are cast iron, or in some cases a combination, with the railings themselves being wrought iron and any decorative panels being cast iron. Unlike malleable wrought iron, however, cast iron is difficult to repair. So it has some disadvantages.

The early and mid-19th century norm was for railings to be mounted on low stone plinths, usually no more than 6-12 inches high. The brick or stucco piers and dwarf walls now so common were a late development. Either there were no solid piers but merely a thicker rail to mark gateways and the boundary between houses and the highway, or else elaborate ironwork piers were created, as at Nos. 76-92 (evens) Ladbroke Grove (see photo above).

The earliest (and the few wrought iron) railings on the estate were quite thin with simple spearhead tops, as for instance the probably original ones on Nos. 11-19 odds Ladbroke Grove, built in the 1830s.  But more elaborate designs quickly became common, with each terrace having its own design, some of which are shown below. These cast iron railings could be mass-produced and builders probably used a pattern book to choose the design they liked. Gates were usually designed to look like a continuation of the railings. They had a lock, the remains of which can sometimes still be seen. There were simpler and thinner railings beside the steps into the basement area. Where there was a front garden, there were also simpler railings along the top of any basement area. 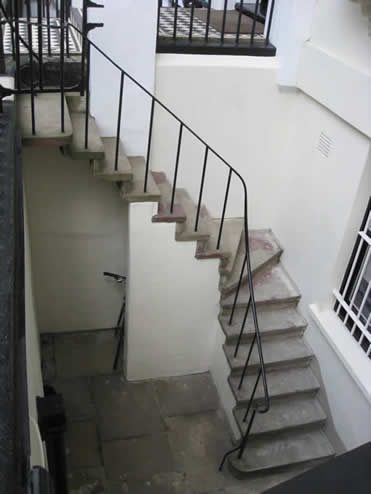 During World War II, most of London’s iron railings were requisitioned to be melted down to help the war effort. In practice, the whole exercise proved a fiasco as most of the iron could not be re-used. There is a bit of a mystery over what exactly happened to the huge amount collected. But rumour has it that the Government, embarrassed by the pointlessness of this great patriotic gesture, had most of the iron secretly dumped at sea. As a result of this exercise, most of the railings around the communal gardens disappeared and many from private houses as well. For instance, a pre-war photograph of the long terrace at Nos. 21-55 Ladbroke Road shows that these houses all had matching railings mounted on low plinths, and it seems likely that these were a victim of this war-time depredation. Many of the missing railings in Ladbroke Road were eventually replaced, but usually on low walls quite unlike the original design.

There was some protection for pre-1850 railings; and where there were no front gardens, the railings that prevented people from falling into basement areas were left in situ. Most of the original railings that remain in the Ladbroke area fall into the latter category. Thus, for instance, good railings remain in Arundel Gardens, Horbury Crescent, Stanley Gardens, Stanley Crescent, as well as parts of Blenheim Crescent, Clarendon Road, Elgin Crescent, Ladbroke Gardens, Ladbroke Grove and Lansdowne Crescent. 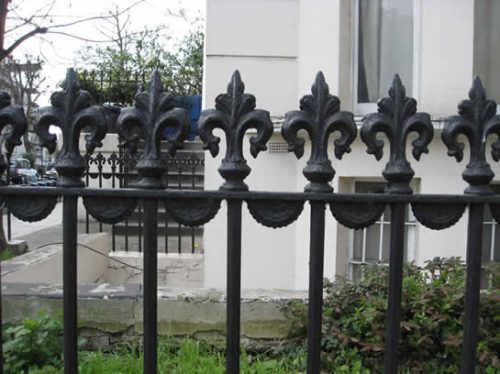 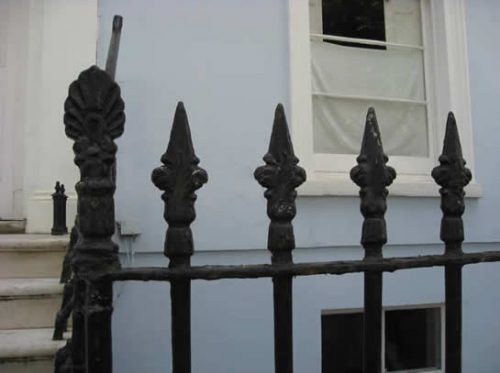 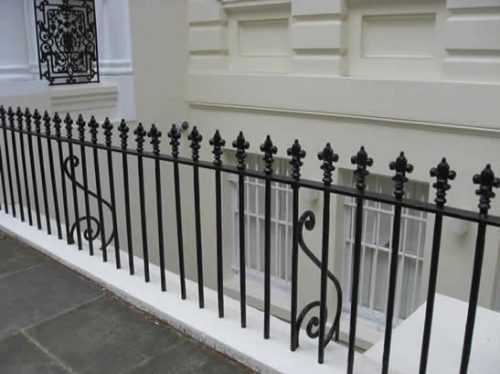 When domestic railings were removed during the war, wooden or wire fencing was often the first cheap and easy substitute. It was then gradually replaced over the years with a wide variety of different types of railings and walls (although a few wooden fences remain). There has in particular been a trend towards low walls with railings on top.

The demolition, alteration or removal of railings and other boundary features along the street normally requires planning permission, and the removal of historic railings will not normally be permitted by the Council. If railings are damaged beyond repair, householders will be required to replace them by replicas (there are now a number of firms making good quality replicas of Victorian railings). In terraces where some of the houses still have their matching railings, we very much hope that any missing ones or modern ones in an inappropriate design will be replaced with suitable replicas of the originals.

Where there is no historical pattern to be observed, to preserve the character of the area, we believe it is nevertheless important that the spacing between the bars of any new railings or gates should be roughly similar to that of the traditional Victorian railings – the densely spaced railings favoured by some modern architects are unnecessary and give an unwelcome sense of enclosure. Similarly, the railings (together with any dwarf walls on which they are mounted) should be no higher than the general run of Victorian railings – i.e. about 4 foot – so as to avoid a fortress effect.

We see it also as very important to avoid full height walls along the street boundary. The views through railings to greenery and architectural features are one of the most essential parts of the character of our area and a valuable townscape amenity for residents. Walls along the street have never been a characteristic of our area and where they have been allowed (as for instance in parts of Ladbroke Road and Lansdowne Road) they create “an oppressive and unfriendly effect” (in the words of the Ladbroke Conservation Area Appraisal) that detracts from the charm of the area. 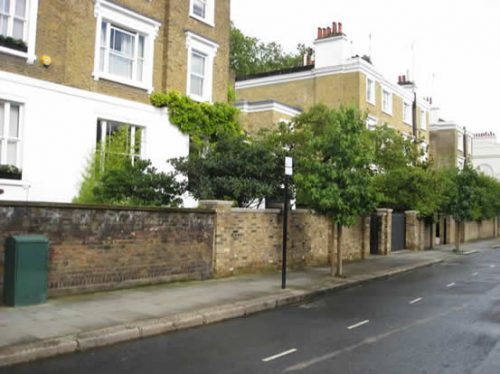 Gates – whether leading to the front door or to a garage or parking area – also should be open ironwork (not solid wood) to an effect of transparency. Again, they should not be too high and should follow the traditional pattern of the railings on that street or terrace.

There is a trend, deplored by some as unfriendly, for front gates to be locked with a bell by the gate so that there is no open access to the front door. This necessitates a post-box by the gate. We strongly support post-boxes being sunk into a pillar so that they are as unobtrusive as possible. It is also important that residents arrange for their post-boxes to be regularly emptied when they are away. An over-flowing post-box is unsightly as well as an invitation to burglars.

Where there is no traditional ironwork there may be scope for imaginative wrought iron designs for railings and especially for gates. The attractive garage gate below is in Lansdowne Walk on a house with a stucco bottle balustrade. 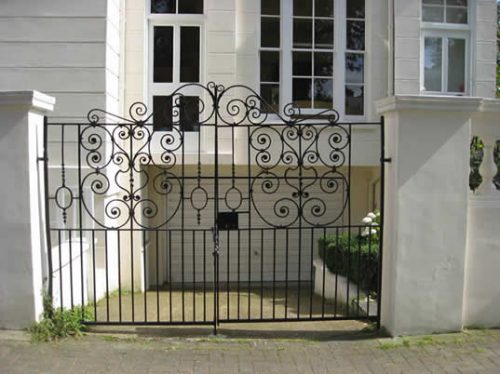 Railings must always be painted to protect the iron from corrosion and rust, and originally most were painted in shades of green to blend in with the greenery in the gardens, and these early layers of paint can sometimes be found when railings are scraped down for repainting or repair. Other popular colours were chocolate brown and dark blue. It is said that they were all painted black after the death of Prince Albert, Queen Victoria’s consort, in 1861 as a sign of mourning. Be that as it may, black is now the standard colour encouraged by the Council (and the Ladbroke Association), as having railings of a single colour contributes to the historical symmetry and uniformity of our terraces. Sometimes the spearheads are painted silver or gold, but we take the view that this is a rather vulgar touch that does not belong in the conservation area. When railings are repainted, ideally all the previous layers of paint should first be removed and any rust dealt with. Where there are too many layers of paint, the crispness and detail of the original design is lost.

Many of the very grand stucco houses, especially those built in the late 1840s and 1850s, have stucco bottle balustrades instead of railings. The best examples are in Kensington Park Gardens and Lansdowne Road. These were no doubt in imitation of the stone balustrades on the grand classical country houses. Many of these crumbled along with much else during the mid-20th century years of decay on the Ladbroke estate. It is heartening that, over the last 10 or 20 years, quite a few have been replaced (again there are now firms who will make good replicas). But there are still many missing.

The City of Westminster has very detailed advice on railings on its website http://www3.westminster.gov.uk/spgs/publications/Railings.pdf .

This article was originally published in the Autumn 2016 edition of Ladbroke News.