Ladbroke Terrace was one of the first streets to be created on the Ladbroke estate. Building started in the 1820s at the Holland Park Avenue end, on the eastern side with four villas between the Avenue and what was to become Ladbroke Road. Others followed within ten years. The normal pattern seems to have been followed with James Weller Ladbroke first giving building leases, and then once the houses were constructed giving 99-year leases of the buildings at a relatively low ground rent to the developer, who could then sell the leaseholds or sublet the houses to recoup his outlay.

The houses are numbered consecutively from south to north on the eastern side and then back down the western side from north to south. 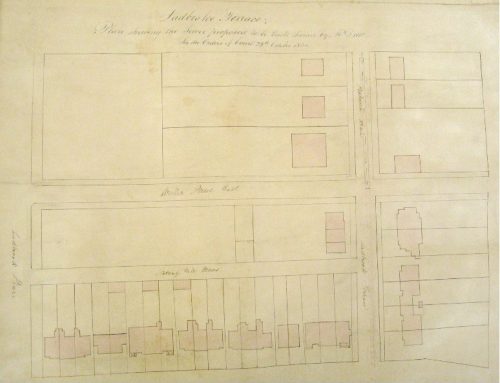 In the case of Nos. 1-4 Ladbroke Terrace, the developer was the architect Robert Cantwell, with financial backing from Major-General Lawrence Bradshaw of Harley Street. The houses were completed in the mid-1820s. They originally formed one continuous stucco-faced two-storey range with semi-basements. The Survey of London describes them as having centrally placed doorways, each flanked on either side by a wide and slightly projecting wing containing one window on each floor. The
doorways have shallow projecting porches supported on Ionic columns, and the wings have plain pilasters supporting a simple horizontal band of stucco which performs the function of an entablature. A low-pitched slate roof rises above wide eaves carried on in brackets set above the pilasters.

Nos. 3-4 remain, although No. 3 has had its ground floor entrance replaced by an entrance in the semi-basement, with the original portico perched rather awkwardly on top; and one of the lower rooms has been replaced by a garage. But their simple elegance is still very much apparent (Cantwell also designed the similar but much grander trios at Nos. 2-6 and 24-28 evens Holland Park Avenue). No. 4 has what may well be its original stone steps to the front door. 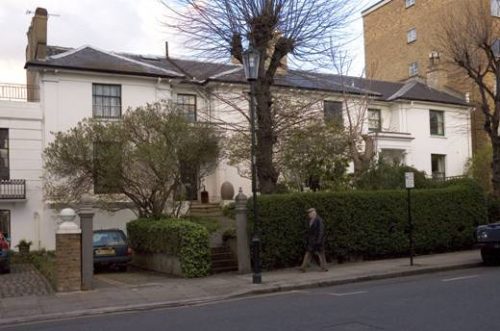 Nos. 5 and 6 date from about 1833 and were probably also built by Cantwell, as Felix Ladbroke granted him leases of both these houses. These two houses are again full stucco but have three storeys above semi-basements.

The 1836 plan above shows a gap between Nos. 4 and 5, but by 1863 this had been filled in by an extension to No.5, probably at first only two storeys high. The front door of No. 5 was moved to the extension at some point – according to a 1893 planning application – with a new hall
on the lower ground floor. The door was then repositioned yet again in the 1990s. In the late 2010s, the whole interior of No. 5 was entirely removed and the whole house rebuilt with only the façade remaining of the original. The whole of the side extension was built up to three floors and the front door again at upper ground floor level (probably nearer to the original).

The original entrance to No. 6 appears from the 1863 Ordnance Survey map to have been set back from the front of the house, which probably had only three full-height bays. At some point the door was brought forward and the present awkwardly high two-bay three storey extension built on the northern side. No. 6 was a guest house or hotel from the 1960s to the early 2000s. 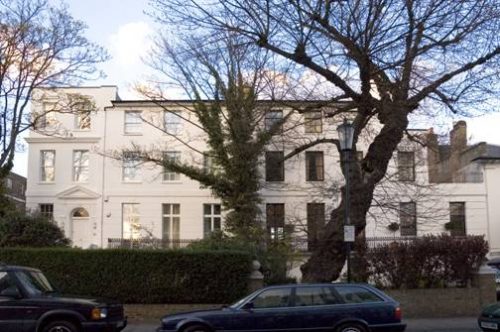 5-6 Ladbroke Terrace in 2006, showing the part two-floor to No. 5, now built entirely up to three floors.

The present Nos. 7 and 9 date from probably around the same period as the other houses in this street and, according to the Survey of London, were probably built by Cantwell and/or William John Drew, who built several of the houses in the western section of Ladbroke Road. They too are simple and elegant low-built stucco houses. They were originally two detached villas, but a full height extension to No. 7 was built to fill the gap, and in the early 1950s, No. 7 was divided into two: the original house and the infill, which became a narrow (three metres wide) house.  This was numbered No. 8. It has now been reincorporated back into No. 7, which explains why there is no longer a No. 8.

No. 9 (Bute House) is relatively unchanged in front, although its façade has been raised and a dormer floor added. Planning permission was given in 1989 for No. 7 to be completely rebuilt behind its existing façade. In the event the entire building was demolished, without consent. It was rebuilt with a near  replica of the previous façade (with  the addition of a dormer floor to match that on No. 9), but nothing of its historic fabric now remains. Moreover, the front door was moved to the lower ground floor – whereas the original house had steps up to a portico on the raised first floor, like No. 9.

Nos. 7 and 9 in 1973, after No. 9 had added its dormer floor but before No. 7 had been demolished and rebuilt. Photo courtesy RBKC 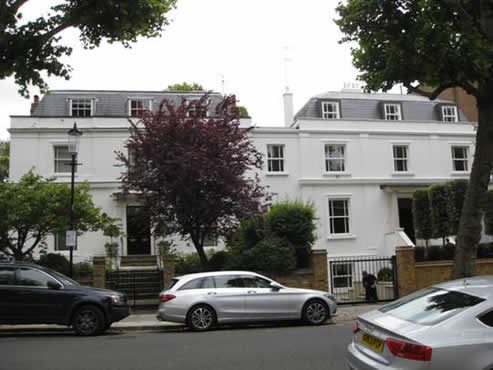 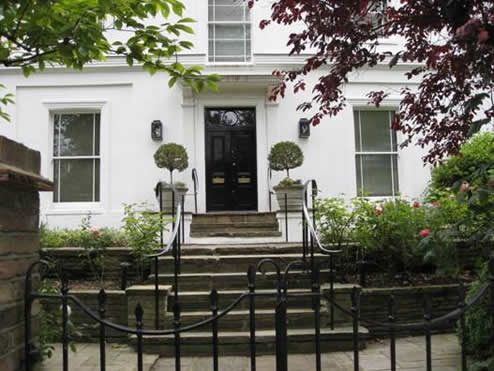 The attractive  raised ground floor entrance to No. 9 (Bute House) in 2015

Western side (Nos. 9A-19 Ladbroke Terrace) 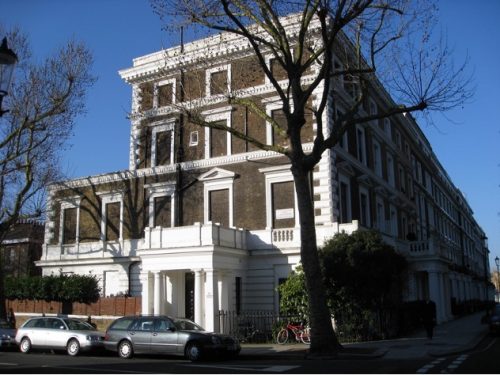 From the 1930s until after the Second World War the building housed a convent of the Missionary Sisters of Our Lady of Africa. In 1964, a Czech Catholic priest founded the “Velehrad” Czechoslovak community centre there (it was named after a famous monastery in the Czech Republic). It provided new arrivals with accommodation and served as a place for various social, cultural and religious events. For many years it was a meeting place for generations of Czech and Slovak refugees and expats. The centre closed down in 1964 and the building was sold for residential use.

To the south of Allason House, on the western side between Ladbroke Square and Ladbroke Road, there were originally two detached villas and a semi-detached pair of villas. Each had a name: Wilby House, Resington Lodge, Hallbank and Burlington House.

Only Wilby House – No. 10 Ladbroke Terrace – survives. All also dated from the 1830s or possibly early 1840s. The Survey of London says that Nos. 10 and 11 were probably built by Cantwell and/or Drew (like Nos. 7 and 9). No. 10 is another long low two-storey house. It is not stuccoed, but has pilasters in a different colour brick. This is unusual for the period – one would have expected stuccoed pilasters like those on the similar houses at 101-119 Ladbroke Road, also built by Drew. 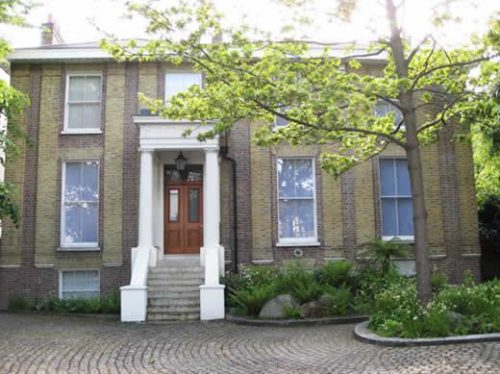 In the 1860s until his death, Wilby House was the home of Robert Cocks (1797-1887) who founded one of the best-known Victorian music publishers, Robert Cocks and Co. The firm is said by his death to have published 16,000 works. Robert Cocks also owned a number of properties in the area which he let, including No. 4 Ladbroke Terrace, No. 29 Ladbroke Walk and No. 24 Ladbroke Grove. In 1851, the census shows him as living at No. 1 Ladbroke Terrace, so he probably owned that too.

In the 1930s, Wilby House was acquired by a masonic organisation. They used the villas an administrative headquarters and built a large one-storey double-height hall in the garden, for use as a meeting place and temple. The Freemasons disposed of the property (both house and hall) in the early 1990s and it is now residential. The hall now incorporates a swimming pool and a stage for events.

Nos. 11, 12 and 13 originally consisted of three houses. No. 11 was a low-built double stucco-fronted detached villa similar to those across the road, and Nos. 22 and 13 (on the corner of Ladbroke Road) were a pair of stucco-fronted detached villas. In about 1942 No. 12 was taken over by the Sisters of Chrity of St Vincent de Paul, a Roman Catholic order of nuns who work in the community, inter alia in the field of healthcare. They seem to have run No. 12 as some form of nursing home or clinic (by 1973 it was listed in the telephone directory as the St Vincent’s Clinic). At some point they seem to have taken over the two houses on either side. They left at the end of the 1970s and the establishment became the Bowley Private Clinic.

In the 1980s the Clinic received planning permission (on appeal) to demolish the houses and to put up the much higher block of sheltered housing now there, called Chartwell House. By that time only No. 11, the corner house, was relatively unaltered (there is a drawing of it among the 1986 planning papers). The Ladbroke Association opposed its demolition, but the planners of the time were dismissive of its merits, misinterpreting its elegant simplicity for crudeness. A 1987 report described it wrongly as Victorian, and as “not of great architectural interest, being rather coarsely detailed and without particular charms”.    There is a drawing of No. 13 (one of the semi-detached houses) in Kensington Public Library dating from 1910, when the owner applied for permission to install a new bathroom (planning case 1205 of 1910). 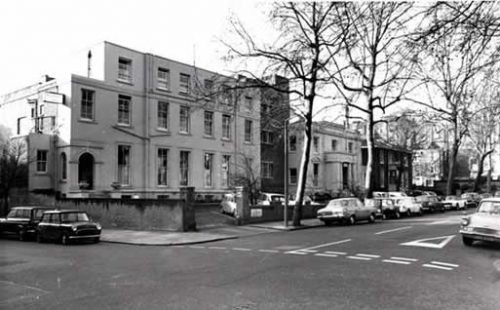 Between Ladbroke Road and Ladbroke Walk, there was originally a trio of attached houses with long gardens extending as far as the Fire Station in Ladbroke Road. In the 1870s, however, this whole corner site was redeveloped and the three houses in Ladbroke Terrace replaced by the present Nos. 14-17. There are planning papers relating to the development in Kensington Public Library (planning case No. 1 of 1872). The houses are in high Victorian style. They are half stucco with four storeys plus basement and dormer floor, the latter with high decorated dormer windows; and porches surmounted with bottle balustrades. They were probably designed by the same architect (W.J. Worthington) as the neighbouring very similar but slightly lower block at Nos. 71-81 Ladbroke Road, built a year or so earlier.

The houses were converted into flats probably in the first half of the 20th century, many of them extending laterally across two houses. Externally, they are remarkably untouched (probably because they remained long in the hands of a single freeholder), retaining their original railings and also what are almost certainly their original stone steps, with bootjacks on either side of the door. Nos. 14 and 15 also retain their original York stone steps down to their front basements (painted black in the case of No. 15). No. 17 retains a brass plaque by the front door enjoining workmen to go round the corner to a “tradesmen’s lift” in Ladbroke Road (presumably at the back of the block). 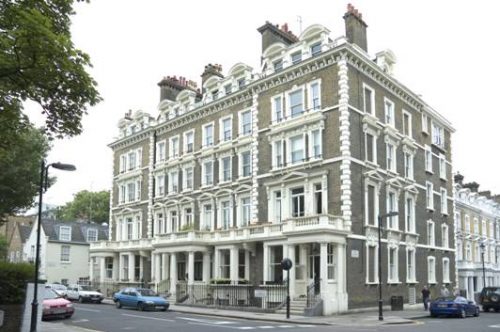 Originally there were no buildings on the west side between Ladbroke Walk and Holland Park Avenue, this stretch being entirely occupied by the flank of No. 2 Holland Park Avenue and its back garden. Stables were then built at the bottom of the garden of 2 Holland Park Avenue, fronting Ladbroke Walk (they were there by the time of the 1863 Ordnance Survey map). These were subsequently altered or rebuilt as the dwelling house that is now No. 18. The owner of No. 18 applied to install a new oriel or bay window in 1923, on the Ladbroke Walk side, but does not appear to have proceeded with the plan. However, the application includes two interesting drawings of the ground and first floor plans (Kensington Public Library, planning case number 1659).

No. 19 Ladbroke Terrace was originally built in the 1930s as a garage and extra house for No. 2 Holland Park Avenue, which was owned at the time by the Cuban Consul (planning application in the London Metropolitan Archives ref: GLC/AR/BR/17/069872). 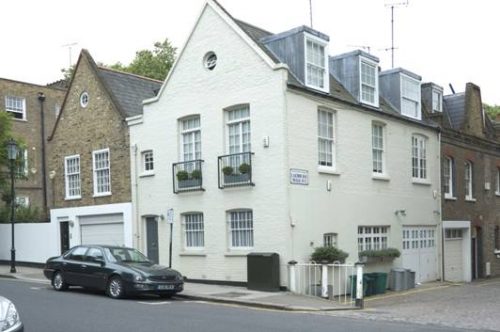