Hayden’s Place is a short mews is just off the Portobello Road between Westbourne Park Road and Lancaster Road. It was built in the 1860s. Its original name was Hayden or Hayden’s Mews; it was only by the time of the 1901 census that was described as Hayden Place. The apostrophe seems to have crept in much later – it was still described as Hayden Place on the 1935 Ordnance Survey map.

There are two almost identical plans, one dated 1863 (the other has no date), of the planned layout of Hayden’s Place in the Kensington Central Library (MS64/1907). They are described as “The Block Plan of a Constructor’s Yard Proposed to be Built by Mr Wm. Hayden”. The plans show a dwelling at either side at the Portobello end and then a series of yards, sheds and stables in the rest of the mews. It is not clear how far this plan was followed. In 1871, 36-year old John Hayden (possibly the son of William), described in the census return as “contractor employing 6 men”, was living at “1 Hayden Mews” with his family. But there were also 18 other numbered dwelling units, so it seems likely that the mews  extended right down as far as Elgin Mews, between the back gardens of the houses in Westbourne Park Road and Lancaster Road, and consisted mainly of stables with dwellings above.

By 1891, however, no more than three households are recorded in the census as living in the mews (five in 1901). It seems that sometime around 1890 the western end of the mews was built over to form a big block of stables, which appears on the Ordnance Survey maps of both 1893 and 1935. Old directories indicate that the stables were used in the 1890s for the horses of the London General Omnibus Company. Later in the 20th century they were put to various uses, including a motor repair business, a furniture repository and a photographic studio. 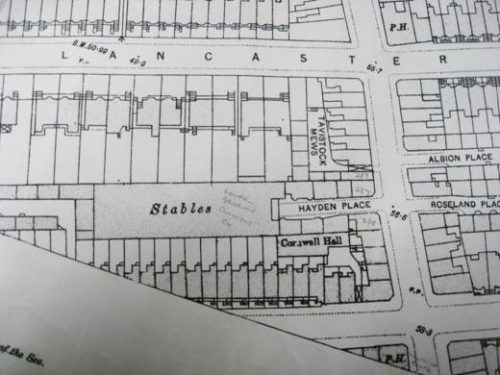 In 1993 the site of the old stables was acquired by a developer who built a well-designed gated development of five modern houses around a garden (architect Gunnar Orefelt). The old houses at the eastern end of the mews have disappeared, probably before the Second World War when the mews was declared a clearance area. The old Nos. 1-4 on the southern side have been replaced by garages.

In the 19th century the mews was inhabited by a mix of grooms, cabmen, shopkeepers, small tradesmen, labourers and charwomen/laundresses. Towards the end of the century the mews, together with the nearby part of Portobello Road, seems to have become a centre for Jews who had fled the pogroms to settle in Britain. The 1891 census records Julius Schneiders, a tailor born in Russia, living in the mews with his wife, six children, a grand-niece and two lodgers. By 1901 there were three Jewish families in the mews, all from Russia or Poland. They were no doubt part of the community that the synagogue in Kensington Park Road had been opened to serve in the previous year.

The mews was built in the 1860s and there is a full set of early deeds for the original Nos. 1-3 Tavistock Mews in the Local Studies section of Kensington Central Library (deeds Nos. 30710-30721).  The map below is taken from the earliest of these deeds. The buildings are described in the deeds as “coach-houses and tenements” – i.e. the coach-house would have been on the ground floor with accommodation above. In the 1920s, it was the Home of the Tavistock Mews Lads’ Club and Institute.

In 1933 the Mews was clearly in a very dilapidated state and it was declared a clearance area. The Council then seem to have acquired most of it and it became a Council depot. 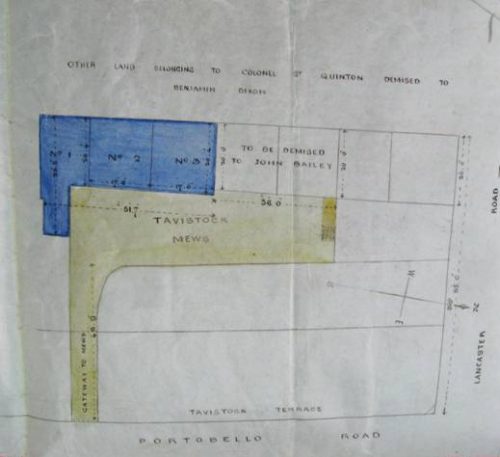