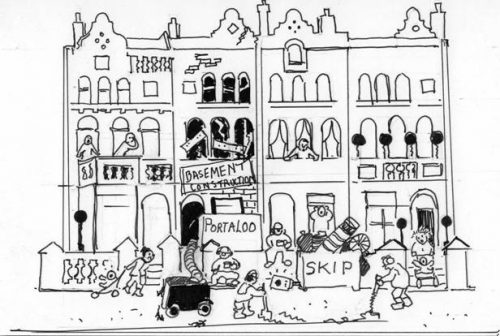 Basement development began to be a problem in the Ladbroke area (and indeed in other wealthy parts of the borough) some 15 years ago, when the fashion started for excavating basements under houses for anything from swimming pools to gyms. The excavation needed can easily cause cracks and instability in neighbouring buildings and also risks of flooding. It is vital, therefore, to set in place safeguards that minimise these risks.

Basement development is perhaps the most contentious subject with which the Ladbroke Association has had to deal in recent years, almost entirely because of the appalling noise, dirt and damage that neighbours frequently suffer during the construction of a basement development, often lasting two years or more. We were among the first to campaign to make basement construction more tolerable for those living nearby. As a result of this campaign, the Council has now restricted the extent of permissible basements and also adopted various rules that must be applied to basement excavations.

Party wall agreements are usually essential for any development affecting the party wall (including the foundations) of an adjoining building, and particularly so for basements. The notes below on party wall agreement were drafted chiefly with basement excavation in mind, but most apply equally to other sorts of development.

The Ladbroke Association survey and report on subterranean development

In 2009 we conducted a survey and wrote a report for the Council on the problems and the action we thought was needed. Since then, the Council has introduced a new basements policy and a code of construction practice which have greatly improved the situation. Moreover, the appetite for basements has dwindled considerably and there are now very few applications for news basement developments. For anybody interested, howeverr, the links below provide a full text of the Report and a separate summary of the responses:

Text of the report
Summary of the responses to the survey